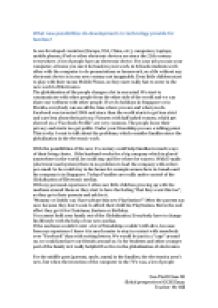 What new possibilities do developments in technology provide for families?

﻿What new possibilities do developments in technology provide for families? In our developed countries (Europe, USA, China, etc.), computers, Laptops, mobile phones, iPod or other electronic devices are since the 21th century everywhere. A lot of people have an electronic device. For your job you use your computer, at home you use it do hand-in your work, in Schools students work often with the computer to do presentations or homework, so a life without any electronic device is in our new century not imaginable. Even little children start to play with their moms Mobile Phone, so they start really fast to enter in the new world of Electronics. The globalisation of the people changes a lot in our mind. We start to communicate with other people from the other side of the world and we can share our wellness with other people. If we do holidays in Singapore or in Florida, everybody can see all the time where you are and what you do. Facebook was invented 2004 and since than the world starts to get less strict and care less about their privacy. Pictures with half naked women, which get showed on a ?Facebook-Profile? are very common. The people loose their privacy and starts too get public. Under your friendship you are a talking point. This is why I want to talk about the problems, which consider families since the globalisation in the electronic work. ...read more.

Maybe not everybody agrees if I say that the statement of the Journal is right, but I think that a family life with electronics is no problem so far not everybody lives in their own world and don?t communicate One family. One room. Four screens. Four realities. If a family life is create like this it could be very dangerous for their social life under each other, because when everybody is using an electronic device and is concentrated on his own work an little world, the rest don?t communicate with each other and it can happen that a family breaks up because op living in their own reality in front of screens and don?t charring their life under each of them. Upper Picture: ?While it may look like some domestic version of ?The Matrix? ? families sharing a common space, but plugged into entirely separate planes of existence through technology ? a scene like this has become an increasingly familiar evening ritual. As a result, the American living room in 2011 can often seem less like an oasis for shared activity, even if that just means watching television together, than an entangled intersection of data traffic ? everyone huddled in a cyber-cocoon.? Everyone huddles in a cyber cocoon tells us a lot about family-life, because in our developed countries this statement is in farest way in families true. ...read more.

Doctors can in the 21-Century life rescue people, who are normally ready to die, but with the technology it helps us to improve our world. Family life counts also under the proceeding of our technology. So everybody can have a computer to work with it and to his work, but too much access on these electronic devices could interrupt the all-day family life. Sources: Electronic Devices Redefine Quality Family Time - NYTimes.com 1. ?Ms. Vavra, a cosmetics industry executive in Manhattan, looked up from her iPad, where she was catching up on the latest spring looks at Refinery29.com, and noticed that her husband, Michael Combs, was transfixed, streaming the N.C.A.A. men?s basketball tournament on his laptop. Their son, Tom, 8, was absorbed by the Wii game Mario Kart on the widescreen television. Their daughter, Eve, 10, was fiddling with a game app called the Love Calculator on an iPod Touch. ?The family was in the same room, but not together? 1. ?While it may look like some domestic version of ?The Matrix? ? families sharing a common space, but plugged into entirely separate planes of existence through technology ? a scene like this has become an increasingly familiar evening ritual. As a result, the American living room in 2011 can often seem less like an oasis for shared activity, even if that just means watching television together, than an entangled intersection of data traffic ? everyone huddled in a cyber-cocoon.? Dan Thrill Class 9B Global perspectives IGCSE Essay Teacher: Mr Hill ...read more.