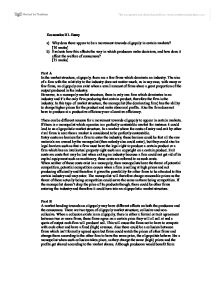 Why does there appear to be a movement towards oligopoly in certain markets? Evaluate how this affects the way in which producers make decisions, and how does it affect the welfare of consumers?

Economics HL Essay a) Why does there appear to be a movement towards oligopoly in certain markets? [10 marks] b) Evaluate how this affects the way in which producers make decisions, and how does it affect the welfare of consumers? [15 marks] Part A In the market structure, oligopoly, there are a few firms which dominate an industry. The size of a firm with the relativity to the industry does not matter much, as in any case, with many or few firms, an oligopoly can exist when a small amount of firms share a great proportion of the output produced in the industry. However, in a monopoly market structure, there is only one firm which dominates in an industry and it's the only firm producing that certain product, therefore the firm is the industry. In this type of market structure, the monopolist (the dominating firm) has the ability to charge higher prices for the product and make abnormal profits. Also the firm does not have to produce at a productive efficiency nor allocative efficiency. ...read more.

When neither of these costs exist in a monopoly, then monopolists have the threat of potential competition, potential competition occurs when a firm is selling at high prices and not producing efficiently and therefore it gives the possibility for other firms to be attracted to this certain industry and may enter. The monopolist will therefore charge reasonable prices as the threat of there actually being competition could serve the same as there being competition. If the monopolist doesn't drop the price of its products though, there could be other firms entering the industry and therefore it could turn into an oligopolistic market structure. Part B A market heading towards an oligopoly may have different effects on both the producers and the consumers. There are two types of oligopoly market structure; collusive and non-collusive. When a collusion exists in an oligopoly, there is either a formal or tacit agreement between two or more firms, these firms agree on a certain price they will all sell at and a quota of output each firm will produce/ sell. ...read more.

They also don't want to move their prices much lower than the current market price because this could trigger a price-war and that would be too risky for all firms involved. This cuts out the possibility of firms in an oligopoly to be able to compete in terms of price and could be considered a disadvantage for being a firm in an oligopoly. Although a firm in an oligopoly cannot compete with prices, they have different possibilities of competing named non-price competition. This could include the branding of a product, advertisement campaigns and specials offers for their consumers. By doing this they hope to create brand and customer loyalty to make their products demand less price elastic. This would be beneficial for the consumers as firms will try to attract them with special offers which try to keep them as their consumers but also the producers might benefit from this in the long-run and it could increase their revenue. ...read more.