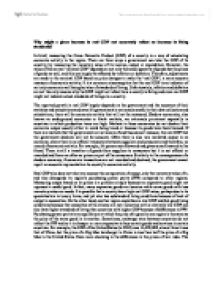 Why might a given increase in real GDP not accurately reflect an increase in living standards? In brief, measuring the Gross Domestic Product (GDP) of a country is a way of calculating economic activity in the region. There are three ways a government can take the GDP of its country; by measuring the monetary value of its income, output or expenditure. However, the value of the normal 'nominal GDP' depends on not only the actual quantity of goods but the prices of goods as well, and this can largely be affected by inflation or deflation. Therefore, adjustments are made to the nominal GDP based on price changes to make the 'real GDP', a more accurate measure of economic activity. It is a common misconception that the real GDP is an indicator of not only economic well being but also of standards of living. Unfortunately, inflation and deflation are not the only reasons why the GDP might not reflect how a society is faring and even real GDP might not indicate actual standards of livings in a country. ...read more.

It is possible that a country has a high real GDP value, perhaps due to its specialisation in luxury items, and yet also has substandard living conditions because of lack of output in necessities. On the other hand, another region could have a low GDP and but good living conditions because the necessities of its citizens are met. Countries with a relatively low GDP can also have higher standards of living than countries with higher GDP because of differences in PPP. Purchasing power parity is an equilibrium at which the price of a good in one region is the same as the price of the same good is in another. Sometimes, exchange rates between countries do not reflect the PPP and so it is cheaper or more expensive to buy certain goods and services in certain countries. For example, the GDP of the United States (in 2010) was 14,620,000, almost three times that of China, but the price of a Big Mac hamburger in China is less than half the price of a Big Mac in the United States. ...read more.

China's rise in real GDP has not so far reflected a correlating rise in standards of living for every citizen. Finally, there is also the notion that "money cannot buy happiness". The real GDP is a measure of the economic and therefore monetary growth and activities. The amount of money and the material goods owned are determinants of living standards, as are stress levels, health, crime rates, political freedom and countless of other externalities. Surveys have shown that though the purchasing power of the average Hong Kong citizen is higher than that of an average European citizen, the average European citizen is more content with his life than the average Hong Kong citizen, because of the long working hours and high stress levels in Hong Kong. Some say that the real indicator of standards of living is the level of satisfaction with a person's own life, not GDP. As Robert F Kennedy says, the GDP "measures, in short, everything except that makes life worthwhile". In conclusion, a growth in real GDP might not accurately reflect a rise in living standards for numerous reasons, some of which are demonstrated above, thus the GDP should not be used to judge human development. Munglok Wong 12 LZ Economics HL: Mr. Parkinson ...read more.