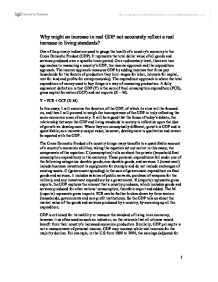 Why might an increase in real GDP not accurately reflect a real increase in living standards?

Why might an increase in real GDP not accurately reflect a real increase in living standards? One of the primary indicators used to gauge the health of a country's economy is the Gross Domestic Product (GDP). It represents the total dollar value of all goods and services produced over a specific timer period. On a rudimentary level, there are two approaches to measuring a country's GDP, the income approach and the expenditure approach. The income approach measures GDP by adding incomes that firms pay households for the factors of production they hire- wages for labor, interests for capital, rent for land and profits for entrepreneurship. The expenditure approach is where the total expenditure of money used to buy things is a way of measuring production. A fully equivalent definition is that GDP (Y) is the sum of final consumption expenditure (FCE), gross capital formation (GCF) and net exports (X - M). Y = FCE + GCF (X-M) ...read more.

GDP is criticized for its inability to measure the standard of living in an economy, however it us often used as such an indicator, on the rationale that all citizens would benefit from their country's increased economic production. Similarly, GDP per capita is not a measurement of personal income. GDP may increase while real incomes for the majority decline. For example, in the U.S from 1990 to 2006, the earnings (adjusted for inflation) of individual workers, in private industry and services, increased by less than 0.5% per year while GDP (adjusted for inflation) increased about 3.6% per year. 1 The major disadvantage of GDP per capita is that it does not measure standard of living, the GDP is intended to be a measurement of total national economic activity, which is a separate concept from the standard of living, which it lacks. There are limitations to GDP; it does not take disparity in incomes between the rich and the poor into account. ...read more.

4 It should be deemed acceptable that the GDP as a standard of living is not the perfect indicator of the absolute level of standard of living, but that living standards also tends to move with per-capita GDP, so the GDP is a good indication for economic activity, but cannot be used to quantify the standard of living. This is why, in terms of the nature of the GDP itself, it does not set out to quantify the standard of living of a country, if standard of living can be quantified at all. In conclusion, the GDP is the statistic used to measure the economy, it represents the total value of the goods and services produced by an economy over some unit of the time. Its inability in measuring parts of the economy has been highlighted, examples would be: underground economies, non-monetary economy, externalities. But the GDP set out to measure the quantifiable sector of economy, the sectors that it cannot measure- development in society is qualitative and cannot be quantified. 1 ^ Statistical Abstract of the United States 2008. Tables 623 and 647 2 http://ideas.repec.org/p/jku/econwp/2000_04.html 3 http://www.timebanks.org/documents/Non-MonetaryEconomy.pdf 4 http://en.wikipedia.org/wiki/Gross_domestic_product#cite_note-20 1 ...read more.