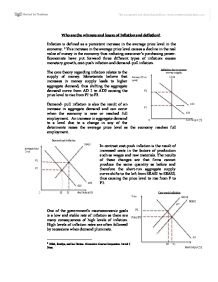 Winners and Losers of Inflation and Deflation

Who are the winners and losers of inflation and deflation? Inflation is defined as a persistent increase in the average price level in the economy. 1 This increase in the average price level causes a decline in the real value of money in the economy thus reducing consumer's purchasing power. Economists have put forward three different types of inflation: excess monetary growth, cost-push inflation and demand-pull inflation. The core theory regarding inflation relates to the supply of money. Monetarists believe that increases in money supply leads to higher aggregate demand, thus shifting the aggregate demand curve from AD 1 to AD2 causing the price level to rise from P1 to P2. Demand- pull inflation is also the result of an increase in aggregate demand and can occur when the economy is near or reached full employment. An increase in aggregate demand to a level due to a change in any of the determents raises the average price level as the economy reaches full employment. In contrast cost-push inflation is the result of increased costs in the factors of production such as wages and raw materials. The results of these changes are that firms cannot produce the same quantity as before and therefore the short-run aggregate supply curve shifts to the left from SRAS1 to SRAS2, thus causing the price level to rise from P to P1. ...read more.

On the international market these products will have less competitive prices compared to lower-inflation countries resulting in a decrease in demand as consumers favour lower prices. Thus decreased demand results in a loss of revenue for firms. Although there are many losers of inflation there are also people who benefit from high levels of inflation. Borrows are winners during inflationary times as the real value of the debt they are repaying is reduced and with increased wages the repayments as a percentage of their wages is less. Asset-price inflation is the tendency for a particular asset to rise in price in price in respect of the general price level. Homeowners interested in selling their property or moving into a smaller property benefit from inflation as during inflationary the value of assets increases making it peak time to sell houses as sellers can sell their property for much higher then they had purchased it. Thus people who own assets are winners to high inflation. Eventually however a point comes where demand will fall either because prices are so high or interest rates are at a level that people are discouraged from borrowing and can lead to a crash in the property market. This results in a collapse in economic investment and demand.. ...read more.

Deflation therefore indirectly effects governments as increased unemployment leads to increased government spending to support the unemployed while also spending money on large projects to create jobs. Borrowers are also losers in deflation. Deflation negatively effects borrowers because their repayments now represent a larger amount of purchasing power than when the debt originally occurred. They might also find that the asset purchased through the borrowing is also worth less - a double impact. Deflation therefore discourages borrowers thus leading to reduced investment. During deflationary periods the Central banks drop rates to encourage borrowing but even the current UK interest rate of 0.5% is not encouraging borrowers as investment is risky. Economists continually debate inflation/deflation and its causes and effects and it is generally accepted that a low steady level of inflation is right for an economy. When either goes above or below this level central banks and governments act to bring it back in line. The many failures in history from the Great Depression to the current Global economic crisis show that the causes and effects of economic policy are not fully understood. There are many other factors such as the general confidence of people in the economy that have impacts and these are not always forecasted. 1 Blink, Jocelyn, and Ian Dorton. Economics Course Companion. 1st ed. Oxford: Oxford University Press, 2007. Print. 2 Blink, Jocelyn, and Ian Dorton. Economics Course Companion. 1st ed. Oxford: Oxford University Press, 2007. Print. ...read more.