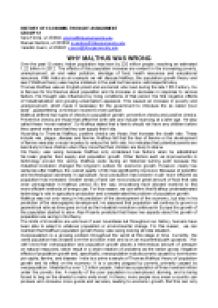 With India as an example we will discuss Malthus, the population growth theory and see if Malthus theory was maybe mistaken in the past but has some valid aspects today.

﻿HISTORY OF ECONOMIC THOUGHT ASSIGNMENT GROUP 12 WHY MALTHUS WAS WRONG Over the past 10 years, Indian population has risen by 220 million people, reaching an estimated 1,22 billion in 2012. The effects of this population increase are evident in the increasing poverty, unemployment, air and water pollution, shortage of food, health resources and educational resources. With India as an example we will discuss Malthus, the population growth theory and see if Malthus theory was maybe mistaken in the past but has some valid aspects today. Thomas Malthus was an English priest and economist who lived during the late 18th Century. He is famous for his theories about population and its increase or decrease in response to various factors. His thought was influenced by living conditions of that period: the first negative effects of Industrialization and growing urbanization appeared. This caused an increase in poverty and unemployment, which made it necessary for the government to introduce the so called ?poor laws? , guaranteeing a minimum income to every person. ...read more.

Malthus was not only wrong in his prediction of the development of the economy, but also in his prediction of the demographic development. He assumed that population will continue to grow in a geometrical ratio as time goes on but as the Industrial revolution continued in Europe the growth of the population started to slow. Also Ricardo predicted that these two aspects about the growth of population are wrong in his theory. The limits of innovation are unknown if even boundless but throughout our history, humans have been able to adapt to whatever population or environmental change. For this reason, we can maintain that Malthus? population growth theory was wrong looking at India situation. Overpopulation is a growing problem throughout the world at this stage in time. Currently, the world population has crossed over the six billion mark and is on an exponential path upwards. We well know that overpopulation and population growth places a tremendous amount of pressure on natural resources, which result in a chain reaction of problems as the nation grows. ...read more.

The rising population provides a supply of labor and contributes to the increase in output of goods. Through Indian fiscal policies and the rise in the education among citizen?s, India was able to generate a high employment which led to an increase in the output of goods and services. Yet, there still is a rising problem in India concerning poverty and malnutrition. But, through the theory that population growth has a positive effect on economic growth, India will prosper in the long run. In the end, India, has become one of the world?s fastest growing economies, primarily due to the rise in population growth creating a positive effect on its long run economic growth. India is now ranked one of the top producers in agriculture and is a top nation in terms of GDP in a developing country. In many cases, economists are correct in saying that population growth has a positive effect on economic growth of a nation. In reality, economists might say, "If it weren?t for its high populations India would still be a suffering developing nation." Words number : 1006 ...read more.