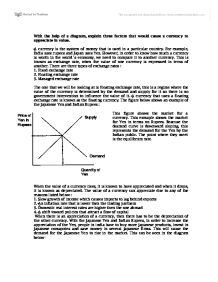 With the help of a diagram, explain three factors that would cause a currency to appreciate in value.

With the help of a diagram, explain three factors that would cause a currency to appreciate in value. A currency is the system of money that is used in a particular country. For example, India uses rupees and Japan uses Yen. However, in order to know how much a currency is worth in the world�s economy, we need to compare it to another currency. This is known as exchange rate, when the value of one currency is expressed in terns of another. ...read more.

The figure below shows an example of the japanese Yen and Indian Rupees : When the value of a currency rises, it is known to have appreciated and when it drops, it is known as depreciated. The value of a currency can appreciate due to any of the reasons listed below : 1. Slow growth of income which causes imports to lag behind exports 2. An inflation rate that is lower then the trading partners 3. Domestic real interest rates are higher then the one abroad 4. ...read more.

This can be seen in the diagram below : The advantage of an economys currency to be in a floating exchange rate is that the exchenage rate does not have to be kept at a certain level. The interest rates are free to be employed as a domeytic monetary tools and can be used to demand management policies like controlling inflation. Also, the floating exchange rate will adjust itself to keep the account balanced. For exmaple if the demand for a currency is low because exports are low, then the supply of the currency would be high. The means that the market will adjust itself and the exchange rate will fall. ...read more.