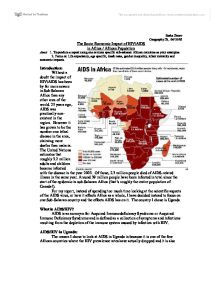 Sasha Zouev Geography IB, .04/10/05 The Socio-Economic Impact of HIV/AIDS in Africa / African Population Aims: 1. To produce a report using one or more specific sub-saharan African countries as your examples 2. Focus on Life expectancy, age specific, death rates, gender inequality, infant mortality and economic impacts. Introduction: Without a doubt the impact of HIV/AIDS has been by far more severe in Sub-Saharan Africa than any other area of the world. 25 years ago, AIDS was practically non-existant in the region. However it has grown to be the number one lethal disease in the area, claiming more deaths than malaria. The United Nations estimates that roughly 3.2 million adults and children became infected with the disease in the year 2003. Of those, 2.3 million people died of AIDS-related illness in the same year. Around 39 million people have been infected in total since the start of the epidemic in sub-Saharan Africa (that's roughly the entire population of Canada!). For my report, instead of spending too much time looking at the scientific aspects of the AIDS virus, or how it affects Africa as a whole, I have decided instead to focus on one Sub-Saharan country and the effects AIDS has on it. ...read more.

Around half of the escapees from the rebels are recorded to be infected with some sort of sexually transmitted disease. It is now believed that the rebels carry out mass-rapes with the intention of spreading the HIV virus, as a weapon against the civilian population. The Effects/Problems of AIDS in Uganda: AIDS has had a staggering effect on life expectancies, death rates, infant mortalities and also the economy of Uganda. With regards to the impact on life expectancy, AIDS is erasing decades of advances in extending life expectancies in Uganda. Before AIDS, Uganda had a life expectancy of around 68 years, in 2010 it is projected the life expectancy will be around 35 Along with the sharp drop in life expectancy, the crisis of AIDS has caused the death rate in Uganda to shoot upwards In 1998, AIDS increased the crude death rate in Uganda by approximately 52 percent. By 2010 the crude rate will be 64 percent higher than it would have been without AIDS. HIV/AIDS-related illnesses are the leading cause of mortality in adults 15 to 49 years old, and to date, more than 1.8 million people have died of AIDS-related diseases. ...read more.

They key message of avoiding casual sex was taken as very simple and the government withheld from throwing scientifically sophisticated reasons such as forms of prevention and so on until later when a decline in HIV figures already took place. One of the most important things to note about Uganda's method of dealing with the epidemic was the way the government was open and honest about it. Since 1986, a message has been spread saying that "yes, there is HIV in the country". This approach was viewed as brave since so many other African politicians were reluctant to talk casually about sex - however the openness was very rewarding. Uganda has been hailed as a very rare success story in the fight against AIDS, commonly being referred to as the most effective national response in the whole of sub-Sahara. What the Future Holds? It is vital that other Sub-saharan governments look at the success of Uganda and try to employ similar fighting schemes. As for Uganda itself, the battle is not near over and the work and effort must continue to minimize AIDS. Currently there is a lack of urgent action. Too much time is wasted on unecassry planning. Instead everyone must act now and contribute in every way they can. Sources: http://www.synergyaids.com/documents/641_uganda.pdf#search='death%20rate%20uganda%20aids' http://www.odci.gov/cia/publications/factbook/geos/ug.html http://www.tasouganda.org/ http://www.aidsuganda.org/aids_in_uganda.htm http://en.wikipedia.org/wiki/Uganda#AIDS-prevention http://www.avert.org/aidsuganda.htm http://www.avert.org/aidsimpact.htm ...read more.