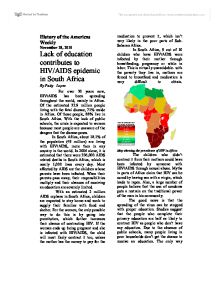 AIDS in Africa. Lack of education contributes to HIV/AIDS epidemic in South Africa

History of the Americas Weekly November 18, 2010 Lack of education contributes to HIV/AIDS epidemic in South Africa By Patty Lopez For over 30 years now, HIV/AIDS has been spreading throughout the world, mainly in Africa. Of the estimated 32.9 million people living with the fatal disease, 71% reside in Africa. Of those people, 88% live in South Africa. With the lack of public schools, the crisis is expected to worsen because most people are unaware of the dangers that the disease poses. In South Africa, about 18.1% of the population (49 million) are living with HIV/AIDS, more then in any country in the world. In 2006 alone, it is estimated that there were 336,000 AIDS related deaths in South Africa, which is nearly 1,000 lives every day. Most affected by AIDS are the children whose parents have been infected. When their parents pass away, their responsibilities multiply and their chances of receiving an education are severely limited. With an estimated 2 million AIDS orphans in South Africa, children are expected to stay home and work to supply their families with food and shelter. ...read more.

Studies suggest that the people who complete their primary education are half as likely to contract HIV as people who don't have any education. Due to the absence of public schools, many people living in poor households don't get the chance to receive an education. The only way forward is prevention. With only 22% of Black Africans completing high school, the people are highly uneducated and unaware of the virus. A survey made in 2009 concluded that only 15% of married couples use a condom. But, in African culture, women are treated like property and men can have affairs with other women. By having casual sex, their risk of contracting the disease is increased. If they do end up getting HIV, they can still spread it, completely unaware that they are even infected. If one of his lovers happens to get pregnant, mother-to-child infection is bound to take place. In 2007, the South African Department of Health Study estimated that 28% of pregnant women were HIV positive. Even if they did get the medication to prevent the child from being infected, if they don't have the money to pay for formula milk, they are forced to breastfeed, which will pass the virus onto the infant. ...read more.

But, in a place filled with poverty and disease, the will of an individual comes into consideration. If a person is not willing to increase their knowledge, they will not go to these clinics to learn the things that they saw in the advertisements. Spreading awareness of the virus is not the only thing that the organizations need to advertise. They need to make sure that people know the facts. In order to resolve the problem, the correct information must be distributed. One study reported that less then half of the people surveyed knew the benefits of condom use or that having less sexual partners would reduce their lower the risk of receiving HIV. In 2007, the government distributed 256 million condoms to the African public, down from 376 million in 2006 even though the problem hardly becoming better. In 1997, there were about 317,000 AIDS related deaths, when in 2006, that number nearly doubled with 607,000 deaths. Attempts to raise awareness on HIV/AIDS have hardly been a success in South Africa. Without proper education, the virus will keep spreading. But, there is hope. The only way out of the crisis is prevention, which can be easily reached with the right information. ...read more.