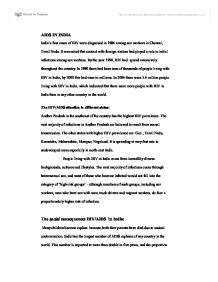 AIDS IN INDIA India's first cases of HIV were diagnosed in 1986 among sex workers in Chennai, Tamil Nadu. It was noted that contact with foreign visitors had played a role in initial infections among sex workers. By the year 1990, HIV had spread extensively throughout the country. In 1990 there had been tens of thousands of people living with HIV in India; by 2000 this had risen to millions. In 2006 there were 5.6 million people living with HIV in India, which indicated that there were more people with HIV in India than in any other country in the world. The HIV/AIDS situation in different states: Andhra Pradesh in the southeast of the country has the highest HIV prevalence. The vast majority of infections in Andhra Pradesh are believed to result from sexual transmission. The other states with higher HIV prevalence are: Goa , Tamil Nadu, Karnataka, Maharashtra, Manipur, Nagaland. It is spreading at very fast rate in undeveloped areas especially in north-east India. People living with HIV in India come from incredibly diverse backgrounds, cultures and lifestyles. The vast majority of infections occur through heterosexual sex, and most of those who become infected would not fall into the category of 'high-risk groups' - although members of such groups, including sex workers, men who have sex with men, truck drivers and migrant workers, do face a proportionately higher risk of infection. ...read more.

In India, young adults, aged15-29, account for 32% of AIDS cases reported. Among those aged 15-24, the number of young women living with HIV/AIDS has been estimated to be almost twice that of young men. As the AIDS weakens a person�s ability to earn a living, forcing many individuals to adopt prostitution as a mean of survival. That�s the reason of the increasing number of prostitutes in India and there is also a danger of spreading diseases to others. One alternative to prostitution is the theft of property: looting, burglary and mugging. These activities undermine society as a whole as well as individual�s quality of life. That is the reason of increasing crimes in India especially in Andhra Pradesh. The people most directly affected by AIDS tends to be sexually active young adults. In India, these people are the only support of their old parents. But as their young children die, they have to struggle hard in their old-age to earn their livelihood as they don�t get any pensions or help from government. And in some cases they have to take care of their grandchildren because both their parents have died due to mutual contamination. HIV is frequently transmitted from mother to baby via breast feeding because a baby�s underdeveloped stomach allows the virus to enter the bloodstream more easily. ...read more.

Effective HIV/AIDS drugs are very expensive, so the large part of the money earned is spend on the family member living with AIDS. Many households in India which otherwise might have remained above the poverty line are pushed below it. Poor farmers in India often sell their livestock and farm to buy expensive medicines , and their children often lack the skills to farm or look after livestock in their care and they become unemployed due to which poverty increases. Increase in AIDS sufferers put more burden on government as they have to maintain more hospitals and staff etc. As the AIDS weakens a person�s ability to earn a living, so they start looting, burglary and mugging. That increases crime in India and also place additional pressure on police forces whose strengths is reduced by AIDS-partly as a direct result of physical contact with infected criminals. In this way Indian government has to spend large amount of money on such a things which results decrease in national income. HIV is frequently transmitted from mother to baby via breast feeding because a baby�s underdeveloped stomach allows the virus to enter the bloodstream more easily. Therefore AIDS is major contributor to increasing infant mortality rate of India to 32.39. And indirectly it has inverse impact on India`s economy. As the country losses children who are the real future of India and results in decrease of labour to work and earn money ...read more.