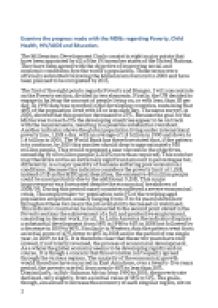 Analysis of the Progress made towards the Millennium Development Goals.

﻿Examine the progress made with the MDGs regarding Poverty, Child Health, HIV/AIDS and Education. The Millennium Development Goals consist in eight major points that have been appointed by all of the 193 member states of the United Nations. They have been agreed with the objective of improving social and economic conditions fore the world?s population. These terms were officially submitted following the Millennium Summit in 2000 and have been planned to be completed by 2015. The first of the eight points regards Poverty and Hunger. I will concentrate on the Poverty section, divided in two elements. Firstly, the UN decided to engage in halving the amount of people living on, or with less, than 1$ per day. In 1990 data was recorded in the developing countries, sustaining that 46% of the population lived with 1$ or less each day. The same survey, in 2005, showed that this number decreased to 27%. Because the goal for the MDGs was to reach 23% the developing countries appear to be on track with the requirements, resulting in a possible substantial overshoot. Another indicator shows the global population living under international poverty line, 1.25$ a day, with an average of 1.8 billion in 1990 and down to 1.4 billion in 2005. The World Bank has therefore stated that, if the pattern is to continue, by 2015 this number should drop to approximately 920 million people. ...read more.

Meeting the states self-sufficiency barrier at 2.2 million tons and leaving more for exportation. A similar approach has been shown to work even in Ghana, another Sub-Saharan nation, suggesting that agricultural-based plans would be the best approach to meet the MDGs economic deadline in this area. Another section of the MDG goals that I will discuss relates to the reduction of Child Mortality. The UN set the goal of decreasing, by two-thirds, the child mortality of each adherent country. Significant progress has been made in the developing countries: here the deaths of children under the age of five dropped from 100 in 1000, in 1990, to 72 in 1000, in 2008. Whilst this may seem a notable success the objective would have been to reach 33 deaths by 2015, meaning they are not on track. It is therefore predictable, for the developing countries, that this goal won?t be encountered. This same problem can be found even on a global scale. The total number of deaths in children was calculated, in 1990, to be 12.5 million. In 2008 this number had declined to 8.8 million. This is certainly a remarkable number, since 10,000 children less are dying each day in 2008, but when keeping in mind the goal, set at two-thirds of the initial amount, the UN has still a long way to go, globally. It is of a concern, though, that the countries maintaining high children mortality are mostly found along the Sub-Saharan Africa. ...read more.

The last subject that I will concentrate upon is the Education. The UN fixed one direct aim for this section: Providing a full primary course education to boys and girls worldwide. The worldwide enrolment rate has been measured to increase from 84% in 1999 to 90% in 2008. The rate at which this number has grown is certainly not high enough in order to reach 100% by 2015. This goal though seems to be extremely exaggerated; a rate of 100% students worldwide would be practically impossible to reach but even getting close to it, at about 96/8% would be an enormous success. It is therefore possible for the world as a whole to reach more or less 95% for 2015, achieving major successes. In order to get this far the UN must therefore concentrate on increasing these numbers especially in Sub-Saharan Africa and South Asia where respectively 31 million and 18 million students aren?t following a primary education, out of the 69 million worldwide. The first and most effective policy that should be established would then be the abolishment of school fees, which resulted in a doubling enrolment ration in Tanzania and other countries. As a conclusion I must summarize that only two of the four sections that I evaluated will be met by 2015: Poverty and HIV/AIDS. The other two won?t be met by probably a slight percentage, meaning that if the goals were to be extended by another 10-15 years they would certainly be on track. ...read more.