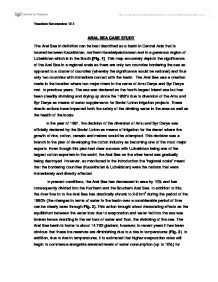 ARAL SEA CASE STUDY The Aral Sea in definition can be best described as a basin in Central Asia that is located between Kazakhstan, northern Karakalpakstansan and in a generous region of Uzbekistan which is in the South [Fig. 1]. This map accurately depicts the significance of the Aral Sea in a regional scale as there are only two countries bordering the sea as opposed to a cluster of countries (whereby the significance would be national) and thus only two countries with immediate contact with the basin. The Aral Sea was a creation made in the location where two major rivers in the name of Amu Darya and Syr Darya met. In previous years, The sea was declared as the fourth largest inland sea but has been steadily shrinking and drying up since the 1960's due to diversion of the Amu and Syr Darya as means of water supplements for Soviet Union irrigation projects. These drastic actions have impacted both the safety of the drinking water in the area as well as the health of the locals. In the year of 1981, the decision of the diversion of Amu and Syr Darya was officially declared by the Soviet Union as means of irrigation for the desert where the growth of rice, cotton, cereals and melons would be attempted. ...read more.

As mentioned in the writing above, agricultural demands have deprived this large Central Asian salt lake of enough water to sustain itself, and hence shrunk rapidly. Uzbekistan, Kazakhstan, and other Central Asian areas utilize the water to grow cotton and other export crops as means of boosting economies financially. Not to mention, the transition of originally growing food crops in the area which only needed to be partially irrigated to cotton and rice which need to widely irrigated (resulting in the construction of vast numbers of irrigation canals), increased the stress on the necessity for water in terms of an agricultural perspective. In addition to being extremely beneficial to agricultural uses, the Aral Sea used to provide millions of people with the basic neccesities of life: food in the form of fish and water necessary for basic needs (sanitation, hygiene, hydration e.t.c). Towns bordering the Aral Sea such as the town of Myunak used to be famous for their plentiful and rich fishing industries are now deserted towns (displacing 40 000 fishermen and bringing the fishing industry to a sudden stop) due to the shrinking and the drying up of the sea. One could also argue that the Aral Sea served as a habitat with a large biodiversity: home to marine life as well as to a range of plants. ...read more.

kidney problems which are expected to worsen when in relation with rising temperatures due to higher concentrations of contaminants in the water. Thus in conclusion it is evident how human factors such as the exploitation of the water for agricultural purposes and the use of pesticides, toxins and chemicals have led to the destruction of the Aral Sea consequently harming the economies, environment and the lives of many people and organisms. In addition to this, it is also obvious with clarity that certain environmental factors such as the rise in temperatures and the low rainfall have also contributed in the diminishing of the Aral sea. In addition, it is also manifest that the diminishing of the sea has led to dwindling of drinking water supplies in the surrounding nations. In addition to this, even the remaining water in the sea is not classified as safe drinking water due to immense amounts of pesticides, toxins, chemicals and contaminants in the water making it unfit for consumption thus affecting access to safe drinking water. In overall, I strongly believe that the Soviet Union made a grave mistake in diverting the rivers as in the end, as opposed to getting an upper hand on teh benefits of this decision, we are now faced with the severe consequences in the form of human lives, our environment, marine life and in terms of financial means. ...read more.

An excellent summary of the Aral Sea case study, using appropriate figures to give evidence. Potential for further use of data in places.
5 stars