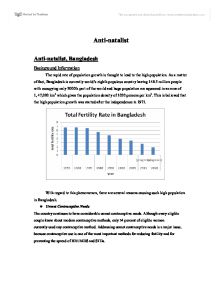 Bangladesh - there are several reasons causing such high population in Bangladesh.

Anti-natalist Anti-natalist, Bangladesh Background Information The rapid rate of population growth is thought to lead to the high population. As a matter of fact, Bangladesh is currently world's eighth populous country having 148.5 million people with occupying only 3000th part of the world and huge population are squeezed in an area of 1, 47,000 km2 which gives the population density of 1020 persons per km2. This is believed that the high population growth was started after the independence in 1971. With regard to this phenomenon, there are several reasons causing such high population in Bangladesh. * Unmet Contraceptive Needs The country continues to have considerable unmet contraceptive needs. Although every eligible couple knew about modern contraceptive methods, only 54 percent of eligible women currently used any contraceptive method. Addressing unmet contraceptive needs is a major issue, because contraceptive use is one of the most important methods for reducing fertility and for preventing the spread of HIV/AIDS and STDs. * Adolescent Population Growth Among currently married women, adolescents age 15-19 had the highest percentage of current pregnancy (16 percent). ...read more.

In 1974, 8.2 percent of Bangladesh's population, 6.27 million people, lived in urban areas, and by 2001, it had increased to 23.4 percent which equaled 21 million individuals. Dhaka, Chittagong, Khulna, and Rajshahi were the four largest cities and the population of each of these cities increased substantially from the year 1974 to 2001. These data show the rapid urbanization that has occurred in Bangladesh and such trend is projected to continue. The population policy goals The major objectives of the Bangladesh National Population Policy was to improve the status of family planning, maternal and child health including reproductive health services and to improve the living standard of the people of Bangladesh through making a desirable balance between population and development. There were also more specified objectives to attempt to accomplish the population policy. One of those objectives was to reduce Total Fertility Rate and increase the use of family planning methods among eligible couples through raising awareness of family planning. The methods used to achieve the population policy goals The country has been mainly dependent on foreign aid. Contraceptive service delivery through a national family planning program was seen as the primary means of achieving those goals. ...read more.

A continuous demographic survey also showed a decline in fertility rates and an increase in the female marriage age, but undercutting this progress was the uneven application of the family planning program in rural areas, which constituted the most populous sections of the nation. In 1985 there were reported only 3,716 family planning facilities in the country and a total of 15,619 family planning personnel, of whom 4,086 were male in a country where the females were traditionally reserved when discussing sexual matters with men. Even when they were physicians, men were reluctant to discuss sexual matters with women. From 1980 to 1985, only about 55 percent of national family planning goals were achieved. However, the environment for improved quality of life for the mass has yet to be achieved. High population growth is still an obstacle to the national development. In addition to population density (1020 persons per square kilometer3, one of the highest in the world), deforestation and reduction of cultivable land, air and water pollution, scarcity of pure drinking water, inadequate shelter, unemployment, malnutrition and slow pace of progress in the health and nutrition sectors are the major impediments to the development efforts of the country. * ?? ?? ?? ?? ...read more.