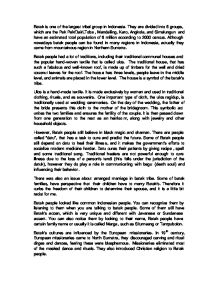 Batak is one of the largest tribal group in Indonesia. They are divided into 6 groups, which are the Pak Pak/Dairi,Toba , Mandailing, Karo, Angkola, and Simalungun and have an estimated total population of 6 million acoording to 2000 cencus. Although nowadays batak people can be found in many regions in Indonesia, actually they came from mountainous region in Northern Sumatra. Batak people had a lot of traditions, including their traditional communal houses and the popular hand-woven textile that is called ulos. The traditional house, that has such a fabulous and well-known roof, is made up of timbers for the wall and dried coconut leaves for the roof. ...read more.

This symbolic act unites the two families and ensures the fertility of the couple. It is then passed down from one generation to the next as an heirloom, along with jewelry and other household objects. However, Batak people still believe in black magic and shaman. There are people called "datu", that has a task to cure and predict the future. Some of Batak people still depend on datu to heal their illness, and it makes the government's efforts to socialize modern medicine harder. Datu cures their patients by giving recipe , spell and some traditional song. Traditional healers are not powerful enough to cure illness due to the loss of a person's tendi (this falls under the jurisdiction of the datuk), however they do play a role in communicating with begu (death soul) ...read more.

Some of them still have Batak's accen, which is very unique and different with Javanese or Sundanese accent. You can also notice them by looking to their name, Batak people have certain family name or usually it is called Marga, such as Situmeang or Tampubolon. Batak's cultures are influenced by the European missionaries. In 19th century, European missionaries came to North Sumatra, they discouraged carving and ritual dirges and dances, fearing these were blasphemous. Missionaries eliminated most of the masked dance and rituals. They also introduced Christian religion to Batak people. This is a short introduction of Batak tribe. There are still a lot of other tribes in Indonesia. We need to understand the other cultures, because it is a part to appreciate the differences of the Indonesians citizens. Therefore the aim of our independence predecessor can be realized, Bhinneka Tunggal Ika. ...read more.