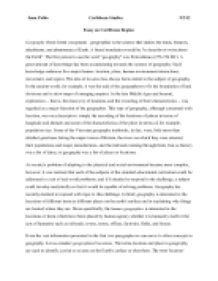 Juan Pablo Caribbean Studies 9/2/12 Essay on Caribbean Region Geography (from Greek ????????? - geographia) is the science that studies the lands, features, inhabitants, and phenomena of Earth. A literal translation would be "to describe or write about the Earth". The first person to use the word "geography" was Eratosthenes (276-194 BC). A great amount of knowledge has been accumulating towards the science of geography. Such knowledge embraces five major themes: location, place, human-environment interactions, movement, and region. The idea of location has always been central to the subject of geography. In the ancient world, for example, it was the task of the geographers to fix the boundaries of land divisions and to draw maps of emerging empires. In the late Middle Ages and beyond, exploration -- that is, the discovery of locations and the recording of their characteristics -- was regarded as a major function of the geographer. This type of geography, although concerned with location, was very descriptive: simply the recording of the locations of places in terms of longitude and latitude and some of the characteristics of the place in terms of, for example, population size. Some of the Victorian geography textbooks, in fact, were, little more than detailed gazetteers listing the major towns of Britain, the rivers on which they were situated, their populations and major manufactures, and the railroads running through them. Just as history was a list of dates, so geography was a list of places or locations. As society's problem of adapting to the physical and social environment became more complex, however, it was realized that each of the subjects of the standard educational curriculum could be addressed to a set of ...read more.

This list is by no means exhaustive. As the economic geography is a very broad discipline with economic geographers using many different methodologies in the study of economic phenomena in the world some distinct approaches to study have evolved over time: 1. Theoretical economic Geography focuses on building theories about spatial arrangement and distribution of economic activities. 2. Regional economic geography examines the economic conditions of particular regions or countries of the world. It deals with economic regionalization and local economic development as well. 3. Historical economic geography examines history and the development of spatial economic structure. Using historical data it examines how the centers of population and economic activity shift, what patterns of regional specialization and localization evolved over time and what factors explain these changes. 4. Critical economic geography is approach from the point of view of contemporary critical geography and its philosophy. 5. Behavioral economic geography which examines the cognitive processes underlying spatial reasoning, locational decision making, and behavior of firms and individuals. Economists and economic geographers differ in their methods in approaching similar economic problems in several ways. To generalize, an economic geographer will take a more holistic approach in the analysis of economic phenomena, which is to conceptualize a problem in terms of space, place and scale as well as the overt economic problem that is being examined. While starting a business it is essential and important to make plans considering the location for the business. This type of planning is called physical planning. The meaning for this plan is the following: the allocation of land to specific uses on a comprehensive territorial basis related to geographical criteria, with consideration given to social criteria. ...read more.

The political systems of the Caribbean states share similar practices. The geography and climate in the Caribbean region varies: Some islands in the region have relatively flat terrain of non-volcanic origin. The climate of the region is tropical but rainfall varies with elevation, size and water currents (cool upwelling keep the ABC islands arid). Warm, moist trade winds blow consistently from the east creating rainforest/semi desert divisions on mountainous islands. Occasional northwester lies affect the northern islands in the winter. The region enjoys year-round sunshine, divided into 'dry' and 'wet' seasons, with the last six months of the year being wetter than the first half. The waters of the Caribbean Sea host large, migratory schools of fish, turtles, and coral reef formations. The Puerto Rico trench, located on the fringe of the Atlantic Ocean and Caribbean Sea just to the north of the island of Puerto Rico, is the deepest point in all of the Atlantic Ocean. Hurricanes, which at times batter the region, usually strike northwards of Grenada, and to the west of Barbados. The principal hurricane belt arcs to northwest of the island of Barbados in the Eastern Caribbean. The region sits in the line of several major shipping routes with the Panama Canal connecting the western Caribbean Sea with the Pacific Ocean. Finally to conclude, I want to say that the Caribbean countries are territories. Some of them are owned by other countries such as England, United Kingdom, and United States. All of the countries are engaged in business transaction and political affairs. These countries in the Caribbean region relate to each other and share some of their history. ...read more.