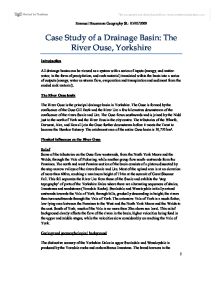 Case Study of a Drainage Basin: The River Ouse, Yorkshire

Case Study of a Drainage Basin: The River Ouse, Yorkshire Introduction All drainage basins can be viewed as a system with a series of inputs (energy, and matter- water, in the form of precipitation, and rock material) translated within the basin into a series of outputs (energy, water as stream flow, evaporation and transpiration and sediment from the eroded rock material). The River Ouse basin The River Ouse is the principal drainage basin in Yorkshire. The Ouse is formed by the confluence of the Ouse Gill Beck and the River Ure a few kilometres downstream of the confluence of the rivers Swale and Ure. The Ouse flows southwards and is joined by the Nidd just to the north of York and the River Foss in the city centre. The tributaries of the Wharfe, Derwent, Aire, and Don all join the Ouse further downstream before it meets the Trent to become the Humber Estuary. The catchment area of the entire Ouse basin is 10,770 km�. Physical influences on the River Ouse Relief Some of the tributaries on the Ouse flow westwards, from the North York Moors and the Wolds, through the Vale of Pickering, while another group flow south-eastwards from the Pennines. The north and west Pennine section of the basin consists of a plateau dissected by the step narrow valleys of the rivers Swale and Ure. ...read more.

Much of the middle and particularly the lower stages of the basin are areas of farmland. The landscape is consequently more open and interception levels are lower. The degree of interception depends on the nature of farming. Pastoral activities are associated with areas of grassed fields where interception is low; while interceptions is areas of arable farming depends on the type of crop and time of the year. Soils The upland areas of the Pennines and Yorkshire Moors are dominated by peat soils characteristic of moorlands. These have an important role, acting like a sponge in summer, absorbing a great deal of precipitation and affecting discharge. However, the effect is reduced from late autumn to early spring when wetter weather means that the ground is largely saturated and so infiltration levels are reduced. The upper valleys are typified by surface water gleys; these are seasonally waterlogged and are slowly permeable. Downstream, the river valleys quickly become dominated by brown soils; suitable for agriculture- this also applies to the Vale of York, where there are also areas of drier sandier soils. It is important to consider the impact of farming on the soils and the consequent implications for water movement in the basin. Areas of groundwater gley extend southeasterly from Thirsk, around York to Selby. The maintenance of well-drained soils, by such factors as healthy vegetation cover, extensive root systems, an open soil structure and plentiful soil fauna, helps to reduce run-off in the basin. ...read more.

This turn leads to an increase in surface run-off as infiltration is reduced. Drains carry much of this water into local streams and rivers, which increased discharge and can contribute to a greater frequency and magnitude of flooding. In recent years urban development has included growth on the fringes of York, Ripon and other settlements in the basin, and motorway-standard widening of the A1 road (which runs north-south in the west of the basin) The Environment Agency can impose conditions on new developments and can raise objections to a planning authority if it believes that a new development would have an adverse effect on both the quantity and quality of water reaching rivers. New urban development often incorporates balancing ponds or tanks that can be used to filter out pollutants. They also store drainage water at times of high discharge in nearby rivers, this water being released at a later dated when river levels are lower. During the 1980s and 1990s there was much growth on the northern fringe of York, in Clifton Moor. This has included a new business park with light industry and offices and retail developments, and the creation of extensive areas of impermeable surfaces, such as car parks. Balancing pounds have been incorporated into the business park to handle excess surface water and any contaminants. The combined control of water quantity and quality is called 'sustainable urban drainage'. ?? ?? ?? ?? Emanuel Hausmann Geography SL: 03/01/2009 1 ...read more.