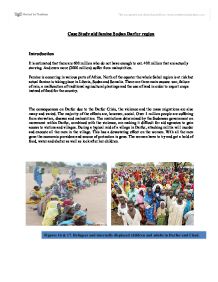 Case study on Aid and Famine in the Darfur Region

Case Study aid famine Sudan Darfur region Introduction It is estimated that there are 600 million who do not have enough to eat. 400 million that are actually starving. And even more (2000 million) suffer from malnutrition. Famine is occurring in various parts of Africa. North of the equator the whole Sahel region is at risk but actual famine is taking place in Liberia, Sudan and Somalia. There are three main causes: war, failure of rain, a malfunction of traditional agricultural plantings and the use of land in order to export crops instead of food for the country. The consequences on Darfur due to the Darfur Crisis, the violence and the mass migrations are also many and varied. The majority of the effects are, however, social. Over 1 million people are suffering from starvation, disease and malnutrition. The restrictions determined by the Sudanese government on movement within Darfur, combined with the violence, are making it difficult for aid agencies to gain access to victims and villages. During a typical raid of a village in Darfur, attacking militia will murder and execute all the men in the village. ...read more.

With an extraordinary annual budget, and almost four years of large scale presence, the Darfur relief operation will enter the coming rainy season witnessing many numbers of malnourished civilians, particularly children. Much of the evidence showing that this was going to happen has been available for some time, but the brutal regime in Khartoum has used its bureaucratic powers and threats of humanitarian expulsion to intimidate both UN and international nongovernmental relief organizations (INGO's). The most culpable silence is that of the UN children's agency, UNICEF, lead agency for reporting on malnutrition in Darfur. This is the organization that has calculated it is better to allow critical humanitarian truths to be concealed than to risk offending a genocidal regime that has the perverse power to control humanitarian access. Malnutrition rates, especially for children under five, already exceed emergency thresholds in much of Darfur, as they did more than half a year ago when UNICEF last oversaw a published malnutrition study. This is not surprising, given a range of reports and anecdotal evidence going back to the beginning of the year. ...read more.

Even so, at any one time there may be hundreds of thousands of people beyond the reach of WFP. More than 3 million people are dependent to varying degrees on food assistance. The gains in addressing malnutrition achieved since major humanitarian efforts began in 2004 are all being lost. Causes of famine Most famines are caused by a combination of political, economic, and biological factors. In some modern cases, it is political strife, poverty, and violence that disrupt the agricultural and food distribution processes. Modern famines have often occurred in nations that, as a whole, were not initially suffering a shortage of food. The failure of a harvest or the change in conditions, such as drought, can create a situation whereby large numbers of people live where the carrying capacity of the land has temporarily dropped radically. Famine is often associated with subsistence agriculture, that is, where most farming is aimed at producing enough food energy to survive. The total absence of agriculture in an economically strong area does not cause famine; Arizona and other wealthy regions import the vast majority of their food, since such regions produce sufficient economic goods for trade. ...read more.