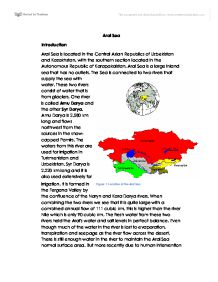 Aral Sea Introduction Aral Sea is located in the Central Asian Republics of Uzbekistan and Kazakhstan, with the southern section located in the Autonomous Republic of Karapakalstan. Aral Sea is a large inland sea that has no outlets. The Sea is connected to two rivers that supply the sea with water. These two rivers consist of water that is from glaciers. One river is called Amu Darya and the other Syr Darya. Amu Darya is 2,580 km long and flows northwest from the sources in the snow-capped Pamirs. The waters from this river are used for irrigation in Turkmenistan and Uzbekistan. Syr Darya is 2,220 km long and it is also used extensively for irrigation. It is formed in the Fergana Valley by the confluence of the Naryn and Kara Darya rivers. When combining the two rivers we see that it is quite large with a combined annual flow of 111 cubic km, this is higher than the river Nile which is only 90 cubic km. The fresh water from these two rivers held the Aral's water and salt levels in perfect balance. Even though much of the water in the river is lost to evaporation, transpiration and seepage as the river flow across the desert. There is still enough water in the river to maintain the Aral Sea normal surface area. But more recently due to human intervention not enough water is entering the sea. This is because locals tried using the rivers as an economy advantage and started many irrigation schemes to produce cotton. But this lead to the shrinking of the Aral Sea and it was shrinking so fast nothing could be done to prevent it. So in this case study I will be looking at how the whole surrounding was affected by the Shrinking of Aral Sea. The Biophysical Environment "The area around Aral sea consists of dry, flat plain with few rivers. ...read more.

All irrigation is full control irrigation, mainly using surface water. Wastewater and drainage water are mixed with surface water before being re-used for irrigation. This pie chart shows the origin of the water used for irrigation in Uzbekistan. What was produced using the irrigation scheme? Mainly cotton was produced in large quantities in 1921 Uzbekistan produced 14,000 tonnes of raw cotton. By 1935 it reached one million tones, and it passed two million tonnes in 1950. By 1990 annual production of cotton had reached six million tonnes. This resulted in a lot of water diverted from the Aral Sea and that figure was eight million tonnes. Cotton was not the only crop produced. The area also produced roses for commercial sale locally and for export. Below is a chart that shows the different things produced using the irrigation scheme. Figure 6: Graph Showing Irrigated Crops The positive effect... There was now a much higher yield of cotton, this was good for the economy in the short term. As there was a high amount of cotton it was exported all over the world and in a very short period of time USSR became the larger producer of cotton and is still today. With the money received from the export of cotton the government would then import crops that were not made in the country. The negative effect... There is really just one main negative effect that the irrigation scheme had on the surrounding area. And that was the shrinking of the Aral Sea. Since more and more water was needed for growing cotton. Very little amount was finally reaching the Aral Sea. Without human intervention 111 cubic km of water ,mentered the Aral Sea yearly but after the irrigation scheme was introduced this figure was reduced to jus 2 cubic km of water. So we can clearly see that the Sea was not getting enough water for it to refill after the water was being evaporated and therefore it kept shrinking. ...read more.

Now this affected the economy because the fishing industry employed about 60,000 people. This industry was a precious part of the region's economy until 1983. This was the time when the fishing industry was forced to stop and this caused unemployment of 60,000 people connected with sea jobs. This lead to the multiplier effect. This is when the system that were connected to the fishing industry all have to close down because the one main system has shut down, I.e. the fishing industry, so the other system can no longer run. So this was the one main reason the unemployment level of the fishing industry was so high because it affected everything around it. Possible solutions * Improving the quality of irrigation canals; * Installing desalination plants; * Charging farmers to use the water from the rivers; * Using alternative cotton species that require less water; * Using fewer chemicals on the cotton * Installing Dams to fill the Aral Sea. * Redirecting water from the Volga, Ob and Irtysh rivers. This would restore the Aral Sea to its former size in 20-30 years at a cost of US$30-50 billion. (Taken from http://en.wikipedia.org/wiki/Aral_Sea) Summary of the Whole Case Study : Here in this diagram shows us how every system was affected by the irrigation scheme from the economy to the climate. It shows what system increased and which decreased. I believe this is a very accurate model on what is happening in the surrounding area. There is no need to explain the diagram as it is self explanatory Conclusion So as we saw in this case study the irrigation scheme had affected the Aral Sea and its surrounding badly. And the negative impacts had overcome the positive impacts. And by looking at this case study you can see the government had made the wrong decision in concentrating mainly on the irrigation scheme and we can see that they were blinded by the short term advantage, but failed to look at what would happen in the long term. ...read more.