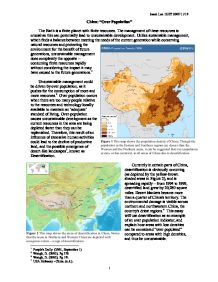 China: "Over Population" The Earth is a finite planet with finite resources. The management of these resources is crucial as this can potentially lead to unsustainable development. Unlike sustainable management, which finds a balance between meeting the needs of the current generation while conserving natural resources and protecting the environment for the benefit of future generations, unsustainable management does completely the opposite - consuming finite resources rapidly without considering the impact it may have caused to the future generations.1 Unsustainable management could be driven by over population, as it pushes for the consumption of more and more resources.2 Over population occurs when there are too many people relative to the resources and technology locally available to maintain an 'adequate' standard of living. Over-population causes unsustatinable development as the current resources in the area are being depleted faster than they can be replenished. Therefore, this result of an influence of excessive human activities could lead to the decline of productive land, and the possible emergence of desert-like landscapes3, known as Desertification. Currently in certain parts of China, desertification is obviously occurring (as depicted by the yellow-brown shaded areas in Figure 2), and is spreading rapidly - from 1994 to 1999, desertified land grew by 20,280 square miles. ...read more.

Climate plays a very important role in this situation. As seen in Figure 310, the Northern and Western regions are semi-arid, exposed to less frequent and fewer amounts of precipitation. Due to the low rainfall, this will eventually lead to a dry season, and will act as a cycle. This will continue to intensify and become more frequent over the years, and will eventually lead to the rivers and lakes in the region drying up. The vegetation and crops then succumb to dryness in the area, and die, and this would decrease the protective vegetation cover. However, the farmers in the area are still reluctant to move out of the area, as that is where their crops are, where the resources come from and also it is the place of their heritage and history. Once the area's resources are significant reduced, including water, the area can no longer sustain the current population's consumption rates, therefore rendering it "over populated." Living standards start to decline, and the farmers either stay and continue to deplete the remaining resources, or move on to other regions which are close by and start feeding off resources from the new area, thus leading to desertification of those areas.11 In contrast, those regions in the South and East are fairing better. ...read more.

One must realize that over population is not defined by "highly and/or densely populated". In fact, through analyzing at immigration, climate, technology and ethnic distribution, it can be deduced that in fact the Northern and Western regions have been affected more than the Southern and Eastern regions in terms of economic pressure and resource depletion. This is because the Southern and Eastern areas are more developed, and the resources available are far better in terms of quality and quantity. Thus, this had lead the quality of lifestyle in the Southern and Eastern regions to be relatively high compared to those in the Northern and Western regions. Therefore, those areas can be classified as "over populated", and thus, is unsustainable. It would be interesting to see how the Chinese government tackles this issue in the future - currently some of the farmers are just planting more trees. Could they attempt to do more? What else could the government do to undo the damages of desertification and make areas not over populated but be sustainable? This could be answered in the near future, depending on how the government decides to tackle this major issue. ...read more.