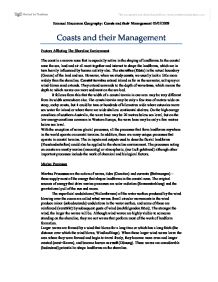 Coasts and their management

Coasts and their Management Factors Affecting The Shoreline Environment The coast is a narrow zone that is especially active in the shaping of landforms. In the coastal zone the sea, land and air all meet together and interact to shape the landforms, which are in turn heavily influenced by human activity also. The shoreline (K�ste) is the actual boundary (Grenze) of the land and sea. However, when we study coasts, we usually look a little more widely than the shoreline. Coastal terrains extend inland as far as the seawater, salt spray or wind-blown sand extends. They extend seawards to the depth of wave base, which means the depth to which waves can more sediment on the sea bed. It follows from this that the width of a coastal terrain in one area may be very different from its width somewhere else. The coastal terrain may be only a few tens of metres wide on steep, rocky coasts, but it could be tens or hundreds of kilometres wide where estuaries move sea water far inland or where there are wide shallow continental shelves. On the high energy coastlines of southern Australia, the wave base may be 20 metres below sea level, but on the low energy coastlines common in Western Europe, the wave base may be only a few metres below sea level. With the exception of some glacial processes, all the processes that form landforms anywhere in the world operate on coastal terrains. In addition, there are many unique processes that operate in coastal terrains. The in inputs and outputs used to describe fluvial landforms (Flusslandschaften) ...read more.

The extra sediments available will be formed into depositional landforms such as deltas, beaches, dunes and so on. On the other hand, if there is a los of sediment, erosion will occur. Whether a landform is erosional or depositional depends on the supply of sediment and energy available. By comparing the appearance of a beach with the model in figure 8.8 on the following pages, we can get good indication as to whether a beach is undergoing a depositional or an erosional sequence at the time. Coastal sediment comes from two main sources. The first is the land, which supplies gravels, quartz sand, silts and muds. These sediments may be brought to the coast by rivers, or they may result directly from the erosion of cliffs. The second source of sediments is the sea. When marine organism die, their shells and skeletons supply carbonate sediments to the coast. We can therefore say that coastal sediments are supplied by river, by marine erosion, or they can be produced on site. A rare (though extreme) type of wave is the tsunami. These form as a result of disturbances in the earth's crust, such as an earthquake or volcanic explosion. These disturbances create long wavelengths at the ocean surface, radiating out from the earthquake centre at speeds of up to 900 kilometres per hour. The height of a tsunami in the open sea might be only a few centimetres, but like tides, their height increases in shallower coastal waters. The combination of their great speed and height can result in immense devastation and loss of life. ...read more.

This is particularly so in areas with moderate to high waves, such as in the southern half of Australia. With the rise in sea level, many coastal valleys were drowned. This formed deep estuaries such as the fjords in the formerly glaciated valley of Norway and New Zealand, and drowned river valleys (or rias) in temperate countries such as Australia. Because the fjords and rias are very young in geological terms, the rivers which flow into them are still depositing their coarser materials (sand and gravel) in the upper reaches of the estuaries rather than at the coastline. At the same time as this is happening, waves and tides are pushing sediments up into the estuaries, and the sediments are lost to the coastal system. In this way, many coastal estuaries are acting as sediment sinks, trapping sediment that would otherwise be available at the coast. This will continue until sediments fill the estuaries and the rivers can flow directly to the coast. Not all sea level changes result from climatic change. Sometimes the land will rise or fall because of local tectonic pressure. Unless an area is compared with other areas, it is difficult to tell in the field whether it is the land or the sea that has changed height. If the land has rise relative to the seal, then raised beaches may result. These are relict features found at a level well above the zone where marine processes currently operate. Changes in sea level are known as eustatism. Therefore, relative changes in the levels of the land and the sea caused by climatic change are often referred to as glacioeustatic changes. ?? ?? ?? ?? Emanuel Hausmann Geography: Coasts and their Management 03/01/2009 ...read more.