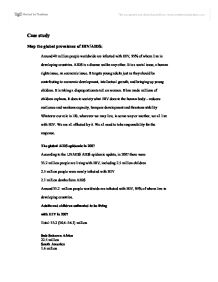 Case study Map the global prevalence of HIV/AIDS: Around 40 million people worldwide are infected with HIV, 95% of whom live in developing countries. AIDS is a disease unlike any other. It is a social issue, a human rights issue, an economic issue. It targets young adults just as they should be contributing to economic development, intellectual growth, and bringing up young children. It is taking a disproportionate toll on women. It has made millions of children orphans. It does to society what HIV does to the human body - reduces resilience and weakens capacity, hampers development and threatens stability Whatever our role in life, wherever we may live, in some way or another, we all live with HIV. We are all affected by it. We all need to take responsibility for the response. The global AIDS epidemic in 2007 According to the UNAIDS AIDS epidemic update, in 2007 there were: 33.2 million people are living with HIV, including 2.5 million children 2.5 million people were newly infected with HIV 2.1 million deaths from AIDS Around 33.2 million people worldwide are infected with HIV, 95% of whom live in developing countries. Adults and children estimated to be living with HIV in 2007 Total: 33.2 (30.6-36.1) million Sub-Saharan Africa 22.5 million South America 1.6 million Caribbean 230 000 North America 1.3 million Middle East and North Africa 380 000 Western and ...read more.

The virus had originated in Guinea-Bissau and that its spread was most likely precipitated by the independence war that took place in the country between 1963 and 1974 (Guinea-Bissau is a former Portuguese colony). The first European cases of HIV-2 were discovered among Portuguese veterans of the war, many of whom had received blood transfusions or unsterile injections following injury, or had possibly had relationships with local women. The first documented case of AIDS was observed in 1976 and by the end of the 20th century the disease had been reported in over 190 countries. Globally, 40 million adults and children were living with HIV/AIDS at the end of 2001. Of infected adults, 48 percent were women. Of 5 million people newly infected with HIV in 2001, 3.4 million of them were in sub-Saharan Africa, making this sub- region the most susceptible to the virus. In the last several years, infection rates among women have increased significantly, especially in sub-Saharan Africa. Four of the earliest known instances of HIV infection are as follows: *A plasma sample taken in 1959 from an adult male living in what is now the Democratic Republic of the Congo. *A lymph node sample taken in 1960 from an adult female, also from the Democratic Republic of the Congo. *HIV found in tissue samples from an American teenager who died in St. Louis in 1969. *HIV found in tissue samples from a Norwegian sailor who died around 1976. ...read more.