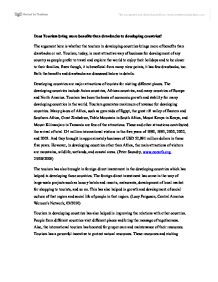 Does Tourism bring more benefits than drawbacks to developing countries?

Tourism has a powerful incentive to protect natural resources. These resources and visiting places are properly preserved for the long term so that maximum number of visitors can take benefit of it for longer time. (Lucy Ferguson, Central America Women's Network, 03/2010) Tourism is not only the source of generating revenue to support conservation and management of natural environments but also creates many jobs and provides employment to many unemployed. In developing countries due to high population and lack of education, maximum people remain unemployed but, tourism provides the opportunity of employment in terms of guide, or small businesses of hotel accommodation, food and beverages, entertainment and transportation, shopkeepers and supplies of goods and services. (Peter Saundry, www.eoearth.org, 25/08/2008) Even though, tourism in developing countries bring many positive changes as discussed above, it comes up with many unwanted and unethical things, too. Tourism in most of the regions is famous for bringing few social problems such as smoking, drinking, and unethical use of drugs. The places like Goa, Bangkok, Thailand, etc. ...read more.

Increased tourism has also resulted in increased demand for water. Due to tourism, the waste of water has increased to the great extent. It has also resulted in air pollution, water pollution, and noise pollution. (Anan Wattanakuljarus, The Nationwide Economic and Environmental Impacts of Tourism: A computable General Equilibrium Approach for Thailand, 02/05/2006) In Africa, the effects of tourism on indigenous peoples have been profound, with the eviction of communities from their lands, in addition to economic dislocation, breakdown of traditional values, environmental degradation. The massive influx of tourists and their vehicles in the Masai Mara National Park in Kenya and in the Ngorongoro Conservation Area in Tanzania has destroyed grass cover, affecting plant and animal species in the area. (Peter Saundry, www.eoearth.org, 25/08/2008) It concludes that even though tourism in developing countries has more of benefits, it also has drawbacks, too. At one hand, if the tourism resolves the problems of poverty, unemployment, inequality based on gender, ethnicity, and nationality and brings the opportunities of growth and development then at the other hand, its calls the problems of pollution, destruction of social ethics, and to some extent gives a boost to global warming. ...read more.