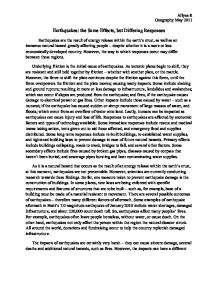 Earthquakes: the Same Effects, but Differing Responses Earthquakes are the result of energy release within the earth's crust, as well as an immense natural hazard greatly affecting people - despite whether it is a more or less economically developed country. However, the way in which responses occur may differ between these regions. Underlying friction is the initial cause of earthquakes. As tectonic plates begin to shift, they are resistant and still held together by friction - whether with another plate, or the mantle. However, the force to shift the plate continues despite the friction against this force, until the force overpowers the friction and the plate moves; causing many impacts. Some include shaking and ground rupture; resulting in more or less damage to infrastructure, landslides and avalanches; which can occur if slopes are produced from the earthquake; and fires, if the earthquake causes damage to electrical power or gas lines. ...read more.

As it is a natural hazard that occurs as the result of an energy release within the earth's crust, at this moment, earthquakes are not preventable. However, scientists are currently conducting research towards these findings. So far, one measure taken to prevent earthquake damage is the construction of buildings. In some places, new laws are being enforced with specific requirements and features of structures that are to be built - such as, for example, base of a building must be made of a material resistant to movement. There are several possible outcomes of earthquakes - therefore many different factors of aftermath. Some examples of earthquake aftermath in Haiti's 7.0 magnitude earthquake of January 2010 include water shortages, damaged infrastructure, and about 230,000 count death toll. So, earthquakes affect many peoples' lives. For example, earthquakes often leave people homeless, without water, or cause death. ...read more.

On January 7th, 2005, a 6.7 magnitude earthquake struck Los Angeles, California. The fact that it was a MEDC played a huge role in the aftermath - both the immediate responses and the long-term responses. Primarily, the earthquake was responded to immediately as electricity supplies were repaired within hours, the Red Cross established emergency food and shelter in nearby buildings within hours, and people were rescued before the death-toll exceeded 57. Almost all schools were opened after just a week, and all were just after three. So, after building new infrastructure and saving dozens of people, the United States was equipped with enough money and technology for repairs due to the earthquake. So, earthquakes have caused tragedy in MEDC's; such as the USA, and LEDC's; such as Pakistan - all leading up to great damages. However, the ability to repair from the earthquake is quite dependent on the economical position of the country. In conclusion, earthquakes are immense natural hazards that greatly affect people - despite it being an MEDC or LEDC. ...read more.

A rather brief review of the different impacts that earthquakes have. This needs a lot more detail in terms of the case studies and comparisons between earthquakes in MEDCs and LEDCs.
3 stars