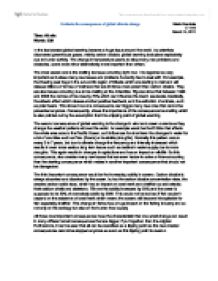 Evaluate the consequences of global climate change. The change in temperature seems to raise many new problems and obstacles, some more minor alternatively more important than others.

Time: 40 min Words: 539 In the last decade global warming became a huge issue around the world. As scientists discovered greenhouse gases, mainly carbon dioxide, global warming took place explosively due to human activity. The change in temperature seems to raise many new problems and obstacles, some more minor alternatively more important than others. The most severe one is the melting ice issue occurring right now. It is regarded as very important as it arises many new issues and problems humanity has to deal with. For example, the thawing peat bogs in the sub-Arctic region of Siberia which are starting to melt and will release billions of tonnes of methane that are 20 times more potent than carbon dioxide. ...read more.

The second consequence of global warming is the change in wind and ocean currents as they change the weather patterns all over the world. An example would be the El Nino that affects the whole area around the Pacific Ocean, as it influences for short term the changes in water for a lot of countries such as Peru (floods) or Australia (droughts). Normally this pattern occurs every 2 to 7 years, but due to climate change the frequency and intensity increased which results in even more serious long term issues such as decline in water supply due to more droughts. This again results in changes in agriculture and has an impact on wildlife. ...read more.

This would not be too bad if fish wouldn't depend on the existence of coral reefs which means the oceans will become inhospitable for fish especially shellfish. This change in fishes has a huge impact on the fishing industry and so not only on the ecology but also on the human food supply. All three most important consequences have the characteristic that one small change can result in many different small consequences that are bigger, if put together, than the original. Furthermore, it can be seen that all can be described as a tipping point as the new created consequences cannot be stopped anymore as soon as this tipping point is overrun. ?? ?? ?? ?? Evaluate the consequences of global climate change Marie Koeckeis E-11-B March 14, 2011 ...read more.