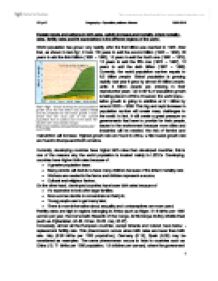 Explain trends and patterns in birth rates, nativity increase and mortality, infant mortality rates, fertility rates and life expectations in the different regions of the world.

Explain trends and patterns in birth rates, nativity increase and mortality, infant mortality rates, fertility rates and life expectations in the different regions of the world. World population has grown very rapidly after the first billion was reached in 1825. After that, as shown in text-fig1, it took 100 years to add the second billion (1825 - 1930), 30 years to add the third billion (1930 - 1960), 15 years to add the fourth one (1960 - 1975), 12 years to add the fifth one (1975 - 1987), 12 years to add the sixth billion (1987 - 1999). Currently, the world population number equals to 6,5 billion people. Global population is growing rapidly: last year it grew by almost 80 billion people, while 3 billion people are entering in their reproductive years. Up to 95 % of population growth is taking place in LEDCs.However, the world popu- lation growth is going to stabilize at 9,1 billion by around 2050 - 2080. This big and rapid increase in population number will create many challenges to the world: in fact, it will create a great pressure on governments that have to provide for their people, issues to the environment because more cities and industries will be needed, the risk of famine and malnutrition will increase. ...read more.

Conversely, almost all the European countries, except Albania and Iceland, have below - replacement fertility rate. This phenomenon occurs when birth rates are lower than birth rate. Italy (8.36 births per 1000 population), Germany (8.18), Spain (9,28) may be considered as examples. The same phenomenon occurs is Asia in countries such as China (13, 71 births per 1000 population, 1.8 children per woman), where the government has intervened through particular laws to reduce the population number, or Japan (7,87 births per 1000 population, 1.7 children per woman). Text - fig. 2: Map showing birth rates in each country of the world (approximately, how many children are born per woman). [http://commons.wikimedia.org/wiki/File:Fertility_rate_world_map_2.png] At the global scale, mortality rate in MEDCs is much lower than the mortality rate of LEDCs, as well as life expectancy. This is a consequence of better nutrition, healthcare, another kind of culture, environmental conditions. For example, the United Kingdom has a death rate of 10.09 deaths per 1000 persons or Spain has a mortality rate of 8.72 deaths per 1000 persons. Although the improvements in food supplies, water and sanitation the birth rate still remain high in the developing countries. ...read more.