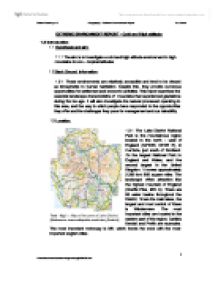 Extreme Environment Report - Cumbria. The aim is to investigate a cold and high attitude environment in high mountains in non tropical latitudes.

EXTREME ENVIRONMENT REPORT - Cold and High attitude 1.0 Introduction 1.1 Hypothesis and aim: 1.1.1 The aim is to investigate a cold and high attitude environment in high mountains in non - tropical latitudes. 1.2 Back Ground information: 1.2.1. These environments are relatively accessible and tend to be viewed as inhospitable to human habitation. Despite this, they provide numerous opportunities for settlement and economic activities. This report examines the essential landscape characteristics of mountains that experienced glaciations during the ice age. It will also investigate the natural processed operating in this area, and the way in which people have responded to the opportunities they offer and the challenges they pose for management and sustainability. 1.3 Location: 1.3.1 The Lake District National Park is the mountainous region located in the north - west of England (54�35'N, 03�20' E), in Cumbria, just south of Scotland. It's the largest National Park in England and Wales, and the second largest in the United Kingdom. It covers approximately 2,290 km/ 800 square miles. The landscape offers attraction like the highest mountain of England (Scaffel Pike, 978 m). There are 88 water basins throughout the District, 19 are the main lakes, the largest and most central of these is Windermere. The most important cities are located in the eastern part of the region; Carlisle, Kendal and Pnrith are examples. The most important motorway is M6, which bonds the zone with the most important english cities. 1.4 Expectation geological history: 1.4.1 Lake District was created 500 million year ago, when the most important rock groups formed. ...read more.

4.2. Climate: 4.2.1 The climate of Lake District is not temperate. The region has a very high rainfall, expecially in the centre, near the Sprinkling tarn. The rainfall is between 1000 mm and 2500 mm. As shown in text-fig.5, the period of maximium rainfall is in Dicember. Thanks to the maritime climate, there are moderate temperature variations during the year. The temperature in January is cold, expecially in the middle part (2�C) (in comparison with Moscow, that is located at the same latitude, the temperuture in the Lakes is not so cold). Also during the summer the temperature is low: while in the centre there could be a temperature of 10 - 14 �C, in the coast there could be 4 - 16 �C because of the proximity to the sea. The region is very windy and the fog is common at any time of the year. 4.3. Population 4.3.1. The zone of Lake District has not a big density. The most populated part is the external one ( around 10 - 150 persons per sq. Km), while in the centre there is a population density of less than 10 persons per sq. Km. The factors responsible for a low density of the population are relief, cold temperature, rainfall, inaccessibility, human discomfort, the fact that it is a desolate region, the lack of important industrial activity and of important energy sources. 4.4. Glacial Environmental: 4.4.1. About 2 million years ago glaciers and ice sheets developed because the climate became colder. ...read more.

One of the aims, for example, is to find energy efficiency matters for community buildings. It has to consider ways of economic development by increasing tourism, mineral extraction, agriculture and farming, without causing environmental issues. Regarding tourism, for example, the society is trying to reduce the number of tourists that visit the areas suffering from lakeshore erosions in order to help plants to grow again. This is why the Lake District Sustainable Development Fund is going to reduce pollution in water and to limit the erosion through retaining walls along the lakeshore. 5.0 Conclusions: 5.1. In the section ''Analysis'' I went through the topics mentioned in ''Espectations'', studying the different geographic aspects of Lake District. The landscape is dominated by mountains and hills, especially in the central part, which present a particular environment because of the glacial and geological history of the zone. The altitude causes a hard climate, difficult mains of transport and different kinds of discomford for human life. The economy of the area is based on agriculture, sheep farmning and tourism. The local authorities are going to solve issues linked to pollution, erosions or energy in order to advance the National Park. 6.0. Evaluation 6.1. In order to support a large number of information, many sources were analyzed. Unfortunately there are not many info about a topic, while there is a big amount of data regarding other points. There is a lack of primary data such as personal pictures or interviews to people who live in the zone, but there are graphs and maps found on internet that help the understanding of the topics. 5. ...read more.