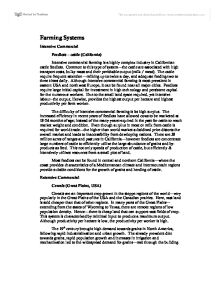 Farming Systems Intensive Commercial Feedlots - cattle (California) Intensive commercial farming is a highly complex industry in Californian cattle feedlots. Common to this type of system-the cattle are associated with high transport costs, bulky mass and their perishable output (milk / meat). The cattle require frequent attention-milking up to twice a day, and adequate feeding two to three times daily. Although intensive commercial farming is most prevalent in eastern USA and northwest Europe, it can be found near all major cities. Feedlots require large initial capital for investment in high technology and persistent capital for the numerous workers. Due to the small land space required, yet intensive labour--the output, likewise, provides the highest output per hectare and highest productivity per farm worker. The difficulty of intensive commercial farming is its high surplus. The increased efficiency in recent years of feedlots have allowed cows to be marketed at 18-24 months of age; instead of the many years required in the past for cattle to reach market weight and condition. ...read more.

The fine soils of the Great Plains are of the most fertile in North America. This is attributed to their climates-semi-arid steppe climate, to a humid continental climate. Summers produce the highest rainfall of the year, whereas other parts of the year such as winter and close to harvesting season are relatively dry. The Rocky Mountains towards the west create a rain shadow-effectively blocking the major weather systems flowing on the west to east jet stream of North America. The flat, open land along with optimal temperatures during the growing season of the regions of the Great Plains allow for extensive commercial farming. The current situation threatening productivity of agriculture in the Great Plains is soil degradation-resulting in the loss of nutrients and water retention of the soils, amounting to millions of dollars lost in productivity. Extensive Subsistence Crofting (Scotland) The practices of crafting encompass the extensive subsistence system of farming. ...read more.

The production of rice in Nepal during 1998-1999 yielded 3.7 million tons in an area of only 1.5 million hectares of land. This statistic shows the huge productivity of the area towards rice farming-as the production of other cereal crops such as maize and wheat in the country fall short of this level of productivity. The steep variation of the country's altitude, abundance of rainfall during monsoon season, and warm subtropical climate allow for a wide variation of areas for the growth of rice in the coastal regions as well as the more mountainous regions. The current state of irrigated rice farming is threatened by shifts in climate. Delays in the monsoon disrupt the already poor infrastructure of irrigation in the country-causing poor production and/or harvests of rice during the harvesting season. As a result of shifts in climate, local variations of rice have seen extinction-even the rice grown in the wetter mountainous regions have begun the process of extinction. ...read more.