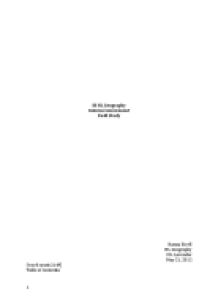 ﻿IB HL Geography Internal Assessment Field Study Hanna Ewell HL Geography Mr. Lavender May 21, 2012 [word count:2149] Table of Contents: A Fieldwork question and geographical context page 3 B Methods of investigation page 4 C Data pages 5-7 D Written analysis pages 5-8 E Conclusion page 9 F Evaluation page 10 Part A Overview Fieldwork Question: Which are more effective in promoting vehicular traffic flow in Nairobi: roundabouts or unregulated intersections? Hypothesis: At rush hour, the unregulated intersection will be severely blocked because people force their way through and nobody waiting their turn. Roundabouts, especially the United Nations Avenue/Ruaka Road one, will work more effectively, up to a certain level of traffic, after which the same problem will arise. Geographic context: Over the past few years, traffic in Nairobi, the capital of Kenya, has increased tremendously due to the rapid increase in the ownership of cars. This has led to problems such as congestion, depletion of green space and noise largely contributing to the overwhelming swell in environmental and urban stress. Nairobi?s geography, which is made up of numerous crests and troughs, has made it very difficult to build convenient connecting roads in order to eliminate some of the congestion problems. ...read more.

and 7:18 (sharp increase) were most likely due to sudden changes in congestion levels during those one-minute periods. As flow rates are not determined by the exit of the vehicles from the intersection, random changes in the amount of cars that are able to come into or do not arrive at the intersection can only explain the anomalies. Although slight fluctuations are visible, the graph clearly shows that the number of vehicles entering the unregulated intersection stayed very similar throughout the observation period. The single anomaly in the very first observation at 8:00 am is not repeated. This may mean that traffic further down the roads has become more congested, which means that the vehicles don?t have anywhere to go. This hypothesis would need to be tested with a longer period of investigation. The increasing number of cars coming into Nairobi is shown by the extreme difference in the percentage of cars versus other types of vehicles at both intersections. As Kenya becomes more economically developed, so do its inhabitants, especially those living in Nairobi. Becoming economically developed involves a higher employment rate, which in turn means more people wanting cars to get to those workplaces and being able to afford them. A large majority of relatively well-off Kenyans own more than one car, simply because they can afford to. ...read more.

What we could have done to eliminate this problem is have everybody write down their own data and then compile the data for each minute later on. Another negative aspect of our study is the fact that we measured traffic flow at two different times, which impacted the amount of congestion and also the total number of cars on the roads. We measured flow rates and transit times at the United Nations Avenue/Ruaka Road roundabout from 6:50 to 7:20 am, while observing the unregulated intersection between Peponi Road and General Mathenge Drive from 8:00 to 8:30 am. Although the time difference may not seem great, the differences in traffic flow shown on the graphs above were great due to our first observations being slightly before rush hour and our second observations slightly afterwards. In other cities this may not play a significant role in traffic flow, but here in Nairobi it definitely does! To eradicate this issue we could have measured traffic flow over two days, observing both intersections at the same time. If we were merely measuring congestion levels, we could have also made sure to measure traffic flow at the height of rush hour and then either well before or well after to see a clear difference. ...read more.