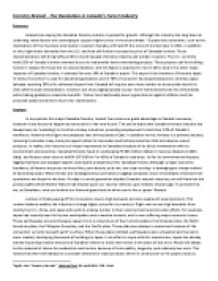 ﻿Forestry Revival - The Revolution in Canada?s Forest Industry Summary Analysts are saying the Canadian forestry industry is poised for growth. Although the industry has long been an underdog, many factors are converging to support higher prices in the years ahead. [1] Supply-side constraints, such as the implications of the mountain pine beetle in western Canada, will help lift the prices of lumber later in 2011. In addition to this, high timber demands from the U.S. and Asia will further increase the price of Canadian lumber. These implementations will bring hefty profits to both Canada?s forestry industry and lumber investors. The U.S. currently holds 25% of Canada?s lumber demand due to its nationwide home remodeling projects. These projects call for building homes in replace for those lost to natural disasters, and this figure is expected to rise in 2011. Asia is the other major importer of Canadian lumber, in demand for over 34% of Canada?s export. This export is fed mainly to China and Japan. In China, the lumber is used for industrial applications and in 70% of consumer housing development, whereas Japan (already receiving 38% of its softwood import from Canada) will require even more lumber to structurally rebuild its cities after tsunami devastations. Investors are encouraging Canada to pour more institutional funds into timberlands while trading globally to maximize benefits. ...read more.

Upon immigrating to Canada she had promised to sponsor her parent?s immigration as well. A decade has passed since her arrival to Canada; the right side of her face is now paralyzed because of a brain tumor, her mother has since died, she has lost all hopes of embracing her father again, and she is only supported by her husband?s income. Judy is one of 16 immigrants who will share their painful newcomer stories at City Hall on behalf of the Mennonite New Life Centre for immigrants and refugees. Many newcomers to Canada quickly familiarize themselves with the term ?Canadian Experience?. ?If you don?t have Canadian Experience or Canadian education, your fate is security guard or construction.? (The Downside of ?Canadian Experience? 1). Others agree that Canada can be defined as the world?s kitchen sink ? draining the Third World?s best brains and only being interested in their brawn once they get here. Thousands of people leave behind good lives in their own countries in hopes of a fresh start in Canada, only to find themselves working second-rate jobs. While Europe warns its immigrants that they?ll suffer by moving there, Canada seems to lure others in with fake hopes. The group of 16 speakers intends to advocate the voices of New Canadians, touching the hearts of others with their agonizing stories of worthlessness and despair. ...read more.

Now, Canada focuses on hitting trade deals rather than providing generous aid. With all of Canada?s multiculturalism and diverse global connections, we should be able to do more in the world around us. The Liberal party of Canada says that Stephen Harper?s Consevatives follow geopolitical examples set by the U.S., and that the party thinks too highly of its Afghan and Haitian relief efforts. Apparently, Harper?s main priorities have been to strengthen ties with Washington, to invest in our military, to freeze foreign aid funds, and to lean towards Latin American affairs rather than those in poorer African states. For Canadians who favor an activist and global agenda, the Liberal regime is the best choice. Ignatieff promises to help Canada become a voice amongst world conflicts, while investing in foreign aid and improving government-citizen relationships. Finally, the Liberals promise to forge deeper contacts with China, India, and other upcoming economic powers that Canada?s current government has neglected. Canadian citizens will be the deciding factor of whether or not Canada is living up to its 21st century duties; ?it?s about punching above our weight.? (Cooke A22) ________________ [1]Inglis, Kim. ?Forestry Revival.? National Post 29 April 2011: FP8. Print. [2] Porter, Catherine. ?The downside of ?Canadian experience?.? Toronto Star 26 April 2011: A10. Print. [3] Cooke, Michael. ?Canada should aim higher.? Toronto Star 23 April 2011: A22. Print ...read more.