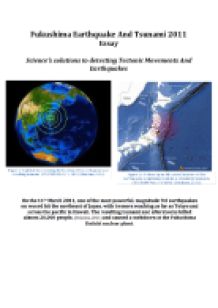 ï»¿Fukushima Earthquake And Tsunami 2011 Essay Science’s solutions to detecting Tectonic Movements And Earthquakes Macintosh HD:Users:160161:.Trash:images-1.jpeg Macintosh HD:Users:160161:Desktop:Unknown-2.jpeg Macintosh HD:Users:160161:Desktop:Screen Shot 2013-10-27 at 5.33.43 PM.png Fukushima Essay In March 2011, Japan was struck by a magnitude 9.0 earthquake and a following tsunami. Authorities concluded that the earthquake was the cause of the Pacific plate releasing the friction built up after years converged under the North American plate (as shown in figure 3) along the fault line that lies kilometres away from Japan’s coastline. (Urbano, 2011)This caused the friction to spread through the ground-and what was originally said to be a magnitude 6.6 earthquake through the evaluation of incomprehensive readings from seismometers- shook Japan for over five minutes. The resulting tsunami was triggered by the explosive energy released by the earthquake. However, its damage was minimized by 10m high sea walls and the modeling of buildings along the coast, which had applied various scientific techniques to reduce impact from waves on actual buildings. Macintosh HD:Users:160161:Desktop:Unknown-1.jpeg Earthquakes are a very significant problem around the globe and can cause havoc through towns. The Japan earthquake and following tsunami resulted in 20000 deaths and caused the destruction of entire towns and many coastal areas of the country- the most notably being the TÅhoku region in Honshu. (Pletcher, 2013) A large percentage of the damage and lives lost could have been avoided if sciences techniques in detecting earthquakes- such as seismometers- would have alerted authorities in advance rather than minutes before the earthquake struck, as well as conveyed more accurate readings. ...read more.

Unlike NASA?s InSAR satellite technology that can detect earthquakes day before they occur (due to its ability to detect even 1cm of movement within the earth) (NASA, 2011), seismometers are only able to detect earthquakes minutes before they happen and the only way scientists can actually issue a warning in advance is if they look closely at the patterns in previous earthquakes or try and interpret seismic readings days before and see if there are any abnormalities. The limitations of possible inaccuracy with data and late warnings made the use of the seismometers quite ineffective during the earthquake. Although seismometers are able to pinpoint the exact location of the epicentre so that aftershocks can be predicted and are able to give a few minutes of warning about the magnitude, it is a scientific device that?s success can easily be affected by influence human error plays in analyzing its data on computers. Sea walls were implemented in Japan to protect its coastal cities from tsunamis. The science behind them is that its strong concrete material, from which it is made of, should be able to block the force of a tsunami. Their height- 10 metres above sea level- were supposed to be sufficient to stop most tsunamis as evidence shows that it is very rare in any part of the world for a tsunami over 10m to a region that is not directly over the fault line. ...read more.

This had a chain reaction on the economy with a major dip in Japan?s GDP (as shown in graph 1) during the period. Conclusion For many years now, scientists have attempted to come up with ways to detect and consequently, prevent earthquakes with measured success- especially in the Fukushima earthquake of 2011. Although the application of science through the use of seismometers potentially saved thousands of lives in the few minutes of warning, it?s accuracy and timing was not enough to stop a nuclear disaster. The 10m sea walls that were located around Japans shoreline also proved ineffective as the tsunami soared over them, leaving all types of buildings to be struck down by the shear force of the waves. However, scientists continue to apply their knowledge of earthquakes, tectonic movement and seismic waves so that they can enhance this solution for future earthquakes around the globe. Seismometers and sea walls fit into the world environment nicely as they do not affect it, but rather help to prevent damage occurring to it, whilst the modeling of buildings simply has the same impact as normal buildings do. Economic wise though, billions of dollars are put into the science and evidence shown from Japan might suggest, too much money for fairly inconclusive success. There are some variables in science that we can?t control, but what can be controlled is minimizing their damage to civilization through the processes of detecting and preventing damage. ...read more.