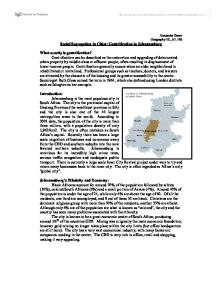 Alexander Zouev Geography HL, 6/11/06 Social Segregation in Cities: Gentrification in Johannesburg What exactly is gentrification? Gentrification can be described as the restoration and upgrading of deteriorated urban property by middle-class or affluent people, often resulting in displacement of lower-income people. Gentrification generally occurs when an older neighborhood is rehabilitated or revitalized. Professional groups such as teachers, doctors, and lawyers are attracted by the character of the housing and its greater accessibility to the center. Sociologist Ruth Glass coined the term in 1964, which she defined using London districts such as Islington as her example. Introduction: Johannesburg is the most populous city in South Africa. The city is the provincial capital of Gauteng Province (the wealthiest province in SA) and the city is also one of the 40 largest metropolitan areas in the world. According to 2001 data, the population of the city is more than three million, with a population density of only 1,962/km2. The city is often mistaken as South Africa's capital. Recently there has been a large scale migration of business and commerce away from the CBD and southern suburbs into the now favored northern suburbs. Johannesburg is notorious for its incredibly high crime rates, serious traffic congestion and inadequate public transport. ...read more.

Crime waves swept the city and left the CBD a very dangerous place. This of course was unappealing for offices and retailers, so they completely abandoned the area. By the late 90's, the CBD was an unsafe no-go zone. Recently there have been significant movements to improve and redevelop the city. The local government installed CCTV cameras all around, which helped combat the crime. Historical buildings have become new condominiums, which are attracting residents. The situation is improving as several large banks and government offices are returning to the center. What exactly is happening? An economic boom is transforming South Africa's old reputation as a city with crime and decay into a growing metropolis. Squatters are being replaced by nice apartments and renovated skyscrapers. Real estate values are skyrocketing as a result. Rooftops with swimming pools and helipads are appearing all over the city - a feat that many never imagined. As a result of an 80% reduction in crime, expensive cars can be parked in the city and people no longer fear using cell phones in public. The key to the gentrification process was making the city a safer place. A square meter that would sell for around 10 back in 2000, now can cost up to as much as 350 and is predicted to rise even further to 3,500. ...read more.

This case drew attention to the critical housing shortage faced by South Africa's poorest people, 12 years after the end of apartheid. The problem of social segregation seems to be getting bigger. Under apartheid, the government not only ignored the black majority, but also pursued policies that kept the blacks out of the city. Now the poorest people, often the blacks, are finding it impossible to find affordable housing close to where their work is. As poorer people where thrown out, they go and occupy another building and cause even more slums. For all of Johannesburg's growth and booming property prices, not everyone is cashing in. There are 200,000 shacks in the city with between 250,000 and 300,000 people on the housing waiting list. Evaluation and Conclusion: This case study provides a great example of how gentrification has welcomed development and investment greatly, but still has small grey areas of controversy with regards to the social segregation. Although the gentrification has helped revamp Johannesburg, something should be done to ensure that everyone benefits from the process, and not only the rich and middle-class newcomers. If the government does more to provide adequate housing for the evicted poor, then perhaps there will be less controversy. The great thing about this case study is that the cost was relatively low to renew the city, however the benefits were outstanding. ...read more.