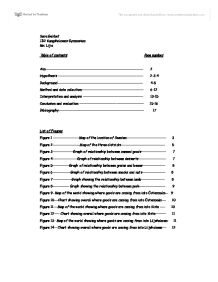 category to contain, however we discussed this with the group and came up with a certain system to avoid as much inaccuracy as possible. Secondly there were many products that did not specify where it was being produced; due to the fact that they were either transnational corporations or it just stated that it was made from inside the EU, these products were ignored. Lastly supermarkets differ in sizes and demand depending on the community in which it has to support. This brought abnormalities in our results especially for Kista since it was a much larger supermarket. To improve this experiment we would need to visit more supermarkets in each area and not only depend on Coop Konsum supermarkets since this is a store which sells ecological goods making it more expensive. Also each store had the same products however in different quantities; therefore our hypothesis would have made a stronger point if we focused on local stores of the three chosen districts. Despite all of the errors that raised inaccuracies, the result clearly state that areas with a high immigrant population does impact the amount of foreign goods, however areas with a low population of immigrants have a certain balance, eating a lot of their own familiar goods as well as exotic ones as well as the fairly even immigrant populated areas. The reasons behind this are due to immigration and tourism, where the immigrants want their own goods and the Swedish populations wants the exotic foods from where they have travelled. Our second hypothesis was proven to be correct due to the fact that Kista is highly populated by a Muslim community; lamb would be the dominant meat whereas in �stermalm pork would take up the greater amount of the meat section. ...read more.