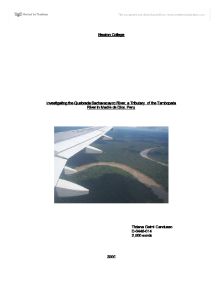 Newton College Investigating the Quebrada Sachavacayoc River, a Tributary of the Tambopata River in Madre de Dios, Peru Tiziana Gelmi Candusso D-0448-014 2,500 words 2005 Map 1.5 Puerto Maldonado: a small urban area located in Madre de Dios. River Madre de Dios Puerto Maldonado, which has 28000 people in it River Tambopata Few main Roads Figure 1.1 Waiting for our Boat to arrive in Puerto Maldonado's Port Fig 1.2 Industries in Puerto Maldonado Extractive industry: Truck with tree trunks going to the city. This increases the surface run off, therefore increases the sediment in the rivers. Map 1.6 Tambopata, a piece of the inner Rainforest of Madre de Dios1 Location of the analyzed sites (see map 1.7) I will refer to the sites as Site A - F, these are the locations of each of these sites: Site A --> site on Quebrada Sachavacayoc River nearer to the Tambopata river Site B --> site on Quebrada Sachavacayoc River a bit further inside from the Tambopata river Site C --> Lake Sachavacayoc (middle of lake) Site D --> Lake Sachavacayoc (inlet) Site E --> Low Bridge of Trail (near platform) Site F --> High bridge of Trail (half way back to lodge) Map 1.7 Sketch Map of the location of sites Map 1.8 Location of Figures in Sketch map of the analyzed sites Figure 1.3 Precipitation Graph of Tambopata 2 The Tambopata Forest has a seasonal rainfall with approx. less than 20 cm/mess a year. The Graph shows an average of the precipitation in the years 2002, 2003 and what usually falls most of the years. Figure 1.4 Tambopata Soil seen from the boat Aims and hypothesis Velocity * Aim 1: To compare the velocity of the river in two different sites of the same river. * Hypothesis 1.1: The velocity of the river further away from the mouth of itself will be steeper * Justification 1.2: Will happen due to the structure of a river, and where it comes from; it should be going down a slope. ...read more.

by it, I got the values from table 4.2. (see appendix for calculations) Average Velocity = Distance Time With these values we can say that both hypothesis 1 and 2 are accepted because the River flow is faster in site B, consequently, the velocity further away from the mouth of the river and before a meander is faster. This happens due to the structure of the river and its steepness. Rivers flow due to the gravity, therefore, the river should be steeper further away from the mouth for the gravity to work., by being steeper there will be more gravity, hence more velocity of the water (see graph 4.1) Graph 4.1 Bar chart of velocity in both sides The Data collected also means that the river does flow faster before the meander due to the friction the meander causes. (See fig 4.1) Figure 4.1 A meander in Tambopata river sowing the differences in velocities The inner side of a meander where deposition happens on Tambopata River Slower water Faster water Flow Flow If the water undergoes a meander it touches more one edge of the river, therefore will create more friction. This friction stops slightly the flow of the river. However it was before the meander (see graph 4.2) Graph 4.2 Flow graph of velocity on site A and B The water has the impulse from before with nothing stopping it; therefore will be faster pH Results of pH measurement (Table 4.3) First pH Second pH Third pH Average Site A 5.49 5.55 5.53 5.52 Site B (middle) 5.75 5.76 5.79 5.77 Site B (edge) 6.09 6.06 6.11 6.09 Site C 6.04 6.1 0 6.07 Site D 6.59 6.58 0 6.59 Site E 6.28 6.3 0 6.29 Site F 6.19 6.23 0 6.21 Tambopata river 6.94 6.91 6.89 6.91 The pH values are shown in table 4.3, where the 3 measurements and the averages are shown. ...read more.

We should have used a secchi disk with a straight stick holding it, instead of a string. The problem here was the slippery soil, we should have counted hoe many plants there where in the different levels from the opposite side of the river, and do a vague sketch for being able to approve or reject the hypothesis. The temperatures where done in different times of the day, with different weather; this altered the readings. We should have done the reading all in one day, or at least in different days but with similar weathers. The whole project was done in different days with different weathers. It should have been done in the same day; the problem was that the sites are to far away from each other. Therefore we should've at least do the sites we where comparing from each other the same day, by sending different groups of people to each site that day. This way the results where done in similar conditions. I tried to do the Gini coefficient method and many other statistical methods but I didn't have the right type of data and of the data I had I didn't have the right amount to do one more so I couldn't do it. I may have extended the project by analyzing the rocks in the basin to see and prove the manning roughness coefficient. This may have helped me prove if the river's rocks do get smaller as getting to the end of the river. I could have also analyzed the rain, by collecting samples of it the day it rained and testing its pH with the pH tester we took. This way we would see if the Tambopata rainforest is being affected by the pollution in the cities nearby, like Puerto Maldonado, and has an acidic rainfall and this would also affect the pH of the river. I could also have tested the pH of the water in the Tambopata River right after they flowed through each lodge to see if the lodges increased the pollution of the river. ...read more.