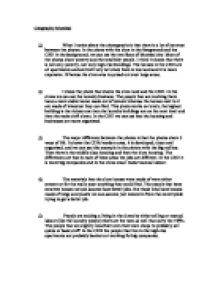 Geography case study. In the photo with the slum in the foreground and the CBD in the background, we can see the two faces of Mumbai city.

Geography Mumbai 1) What I notice about the photographs is that there is a lot of contrast between the photos. In the photo with the slum in the foreground and the CBD in the background, we can see the two faces of Mumbai city. Most of the photos show poverty and the wealthier people. I think it shows that there is not only poverty, nor only high-rise buildings. The houses in the CBD are all apartments and are built very tall since there is less land and it is more expensive. Whereas the slum area is spread out over large areas. 2) I chose the photo that shows the slum land and the CBD. In the slums we can see the laundry business. ...read more.

In the CBD it is more big companies and in the slums small trade/manual labour. 4) The materials that the slum houses were made of were either cement or for the really poor anything they could find. The people that have concrete houses we can assume have better jobs. But those who have houses made of twigs and plastic we can assume just moved in from the countryside trying to get a better job. 5) People are making a living in the slums by either selling or manual labour (like the laundry people) there are the men as well that carry the Tiffin. The people that are slightly wealthier own their own shops to probably sell spices or basic stuff. ...read more.

8) There is no proper rubbish disposal, I think that someone comes around to pick up all the rubbish and then just dumps it into a "waste land" but like in the photos it was a dried up river bed. It is really bad since it clogs up a lot of land and it is not healthy to live around such filth. 9) The hazards of this way of disposal are that when Mumbai floods, the rubbish get picked up with it. Many children play in the water and as they haven't had all the vaccinations they can get very ill from playing in filthy water. The waste is also very bad for the environment, as plastic doesn't decompose for a very long time. As well as the fact that when tourists come to Mumbai they see all this filth which gives them a bad impression of India. ...read more.