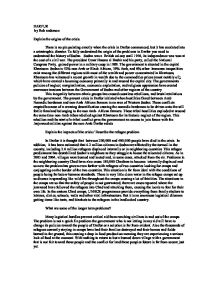 Explain the origins of the crisis.

There is no pin pointing exactly when the crisis in Darfur commenced, but it has escalated into a catastrophic disaster. To fully understand the origin of the problems in Darfur you need to understand the history of Sudan.   Sudan was a  British colony until 1956, its independence was won at the cost of a civil war. The president Omar Hassan al Bashir and his party, called the National Congress Party,  gained power in a military coup in 1989. The government is situated in the capital Khartoum. Sudan is 52% non-Arab or Black African, 39% Arab, and 6% other. Immense inequalities exist among the different regions with most of the wealth and power concentrated in Khartoum, Khartoum has witnessed a recent growth in wealth due to the commodities prices (most notably oil), which have created a booming economy primarily in and around the capital city. The governments policies of neglect, marginalization, economic exploitation, and religious oppression have created enormous tensions between the Government of Sudan and other regions of the country.

This inequality between ethnic groups has caused countless rebellions, and brutal retaliations by the government. The present crisis in Darfur initiated when hostilities flared between Arab Nomadic herdsmen and non-Arab African farmers in an area of Western Sudan. These conflicts erupted because of n creasing desertification causing the nomadic herdsmen to be driven onto the still fertile farmland belonging to the non Arab- African farmers. These tribal hostilities exploded at around the same time non-Arab tribes rebelled against Khartoum for its historic neglect of the region. This rebellion and the start of a tribal conflict gave the government an excuse to join forces with the Janjaweed militias against the non-Arab Darfur rebels

Explain the impacts of the crisis / Describe the refugee problem

In Darfur it is thought that  between 200,000 and 400,000 people have died in the crisis.  In addition,  it has been estimated that 4.2 million citizens in Sudan are affected by the turmoil in the country, including 2.6 million refugees displaced internally or in neighboring countries. This refugee predicament has destabilized Sudan’s neighbors as they struggle to house the relocated citizens. As in 2003 and 2004, villages were burned and looted and, in some cases, attacked from the air. Problems in the neighboring country Chad have also cause 180,000 Chadians to become  internally displaced and so now the problem has grown even further with refugees of two countries looking for camps and conjugating on the border of the two countries. This situation is far from ideal with the conditions of people being far below humane standards. There is very little clean water in the refugee camps set up so disease is spreading like wild fire throughout the camps causing a lot of fatalities. The situations in the camps are so that the safety of people is not guaranteed, there are cases reported where the janaweed have followed the refugees into Chad and attacking them, causing the locals to fear for their own life. In the eastern Chad camps, UNHCR programmes provide everything from family shelters to latrines, clinics, schools, wells and other vital infrastructure. But it is an enormous logistical dilemma getting items like tents, and blankets to the refugees in the landlocked country.

What are some of the longer term problems?

Many logistical hurdles prevent critical aid from reaching civilians in and out of the camps.  The problem is not a quick fix problem the government who is not letting in any aid will have to change its policies toward the people of Darfur or a solution is far from evident. Also the thousands of refugees currently staying in camps have had their families destroyed and their homes and fields burned to the ground, this causing a drop in food production meaning they are experiencing a serious lack of food at the moment. With nothing to return to but a burned down village with a government that is not fair toward these people and the conflict for land these peoples future is far from secure just yet.