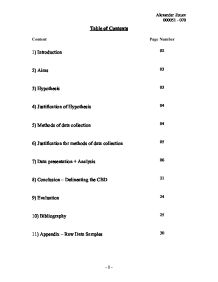 Table of Contents Content Page Number 1) Introduction 02 2) Aims 03 3) Hypothesis 03 4) Justification of Hypothesis 04 5) Methods of data collection 04 6) Justification for methods of data collection 05 7) Data presentation + Analysis 06 8) Conclusion - Delineating the CBD 21 9) Evaluation 24 10) Bibliography 25 11) Appendix - Raw Data Samples 30 1. Introduction: The city of Antwerp is considered to be the capital of commerce and business in Belgium. With a population over 520,000, Antwerp is Belgium's second largest city and is the capital of the Flanders province.1 Apart from downfalls during both world wars, Antwerp continued to experience great economic success, and geographically expanding both horizontally and vertically. My ultimate objective will be to delineate the Central Business District of Antwerp, and we have chosen to study outwards from the Franklin Rooseveltplaats, which we assume to be the CBD of the city. Information along the north, south, east and west transects will be considered. 2. Aims of the field study: I. To delineate the Central Business District (CBD) of Antwerp, Belgium. II. To investigate the extent to which Antwerp's urban morphology conforms to the Burgess' (1924) Concentric Ring Model of the city III. To investigate the distributional pattern and location presence of Antwerp's hotels 3. We hypothesize the following: I. A clear-cut edge to the CBD will be apparent, and the CBD will be identified. II. The proportion of office and retail space to residential use will decline with distances from the CBD. III. Traffic and pedestrian counts will decline with distance from the CBD. ...read more.

Possible errors and limitations that occurred whilst gathering and analyzing the data included the problem of not being able to tell what the land use was at higher floor levels (perhaps it would be better to use only bottom floors). Another problem was that some "home offices" were a split between residential and office, and the "others" category. For the purpose of this study, banks and building societies were included in office count. MAP1LANDUSAGE MAP2PED+CARCOUNT To be able to see how pedestrian counts differ with distance from the presumed CBD, I will be using line graphs (a pedestrian was defined as someone of school age and over walking along or in the transect): Analysis: These graphs, combined with the map on the previous page, shows that in almost all instances, as distance increased, the pedestrian count decreased. In the northern transect this is very clear, as can be seen by the nearly strait downwards line in the graph. Also by looking at the map, it can be seen that the larger clusters of people were located in or near to the Rooseveltplaats. Significant observations can be made about the western transect, where pedestrian count remained very high in the initial stages - this is because Antwerp's main shopping street, the Meir), was located in the beginning. This analysis supports hypothesis III, where we stated that indeed the pedestrian count would decrease with distance from the CBD (aim I). To see how traffic counts vary with distance from the presumed CBD area, we will use bar graphs: Analysis: Although for the eastern and the southern transect there appears to be evidence of an inverse relationship between distance from the CBD and the traffic count, for both the western transect and the northern transect, there is no such pattern. ...read more.

This is very much in line with what my delineation suggest, as we can clearly see an ellipse shaped zoned going from just northeast of the Rooseveltplaats (where the station is) all the way down west to almost where the river is. MAP5DELINEATION 9. Evaluation: One must keep in mind that for the most part, we only investigated 4 separate transects of the city which, for a place like Antwerp that is home to more than half a million people, is understandable because mapping the whole city would be too difficult. It would have been more appropriate to do 8 or more transects, considering there were actually that many streets leaving Rooseveltplaats - perhaps that hypothesis needs to be reworked. The methods that appeared to give the most accurate delimitation of the CBD were the land use models, pedestrian counts and parking places map. The method that gave the least effective result was the building height analysis. Assumptions that each storey is the same height in meters is a limiting factor It must be recognized that in this town, although there was an obvious CBD, we had no clear-cut boundaries. The area of the CBD was however similar to my preconceived picture of its limits. If I were to repeat this investigation then I would certainly attempt to include the Central Business Index as a technique as it involves a combination of land use characteristics, building height and land values. It was not used because we had problems obtaining total floor and ground areas for the buildings. Another refinement to the techniques used would be to obtain old maps of Antwerp and see whether the CBD has been shifting. 10. ...read more.