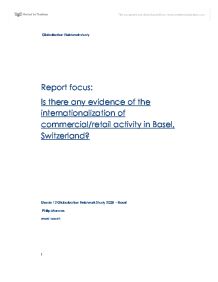 Globalisation Fieldwork study Report focus: Is there any evidence of the internationalization of commercial/retail activity in Basel, Switzerland? Grade 12 Globalization Fieldwork Study 2008 - Basel Philip Mannas word count: Table of Contents Introduction Aims of Investigation Location map of Switzerland (in the world) Location Map of Switzerland (in Europe) Detailed Map of Basel/site locations definitions of globalization Hypothesis Methodology I Methodology II Analysis of results Evaluations and conclusions Bibliography Appendices A - Random Aisle sampling results B - Price - distance results, Spearman's Correlation Coefficient C - Car Survey raw data D - Random aisle Food Survey raw data E -Land Use Maps F - Regional Map of Switzerland Introduction Basel's location in the heart of Europe, with its land-locked status suggests that it is a country that has evolved around contact and interaction with its neighbors. It is the third largest city in Switzerland and lies at the Rhine which was the initial element for its economic growth and development1. As a result, Switzerland is a country that embraces the need for international co-operation, and acts as good example of a country that interacts with globalization. Figure 1: Central Basel City Source: http://www.expatexchange.com/images/city_profile_switzerland_basel.gif 1. Basel EKG, 08 Aims The main aim of this report is to investigate the evidence of internationalization as a factor of globalization to evaluate how commercial/retail sectors affect Basel, Switzerland. Basel is a popular city for transnational corporations, foreign shops and the overall retail industry. General Theory of Globalization Globalization is very broad term and can be viewed differently. Globalization is a concept that refers both to the compression of the world and the intensification of consciousness of the world as a whole. ...read more.

The basic type of food products came from Switzerland whereas most of the 'breakfast' goods came from international countries. Graphs A1 - A3 indicate the variety of food products compared with the frequency for the exports from the country of origin. Most of the exports/or the known country of origin is from bordering countries or countries lying within Europe such as Italy, UK, France, Holland etc... The only international exports were originated from the US because the US economy is based upon the spreading of products as a global economic power! This is shows another hint that globalization is present due to the spreading of universalization. See Raw data in Appendix A3 3. There is no significant relationship between the price of 75cl wine and the distance of Capital city of the country of origin. For the Price vs. distance survey the Spearman's rank correlation had shown a various set of results. The results had shown according to figure (B4 -B5) that the null hypothesis was accepted once according to the significance value of percentages with 13 degrees of freedom. At site 1 and 2 the significance level had exceeded 5% which means that the null hypothesis could not be accepted. The statistical value therefore depicts that there is no positive correlation between the distance of the country and the price of the food product. However, these set of results are still to be recognized significant because they reached the significance value in almost close proximity. However in site 3 a positive correlation could be evaluated as the significance level reached the 1% curve when matched across with the degrees of freedom. ...read more.

Some supermarkets also have different prices for the same item and therefore only generalization could be determined for a relationship between food and distance which is why the null hypothesis was not accepted at two sites. Other factors are: Shops near the main roads may charge more, seasonal prices can be raised and cumulative sampling may distort the expected price-distance gradient if several shops cluster within a short area along the transect line followed by a considerable gap before the next group of retail outlets. There is a large variety of evidence of the internationalization of commercial/retail activity in Basel, Switzerland. Most of the data was relevant and significant in answer all hypothesis. The results for recording the license plate and origin of cars had indicated that transnational corporations are affiliated in international economy and global trade. The land Use Maps have clearly shown a ratio for the contrast between local stores and transnational corporation where internationalization is highlighted. The selection of wine in three different sites had shown the variety of diversity of products from cross bordering and international countries. A random sampling test in supermarkets had shows the presence and the spreading of food products amongst bordering nations to show the dependency of Basel with its bordering countries. The suitability of testing the main hypothesis was relevant from most of the data that had been collected. The least effective set of results came from the license plate registration as the majority cars were registered within Switzerland and Basel itself. Some improvements could be made such as visiting more than 3 sites and or finding more sophisticated data through variety of different samples of the same products to show diversity and more relevant and significant data towards the main hypothesis. ...read more.