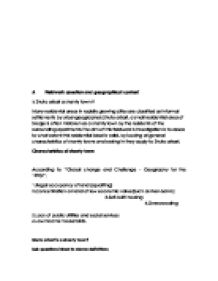 A Fieldwork question and geographical context Is Shuto orizari a shanty town ? Many residental areas in rapidly growing cities are classified as informal settlements by urbangeographers.Shuto orizari, a small residential area of Skopje is often mistaken as a shanty town by the residents of the surrounding apartments.The aim of this fieldwork is investigation is to assess to what extent this residential label is valid, by looking at general characteristics of shanty towns and seeing in they apply to Shuto orizari. Characteristics of shanty town According to ''Global change and Challenge - Geography for the 1990s''. 1.Illegal occupancy of land (squatting) 2.Concentration on land of low economic value(Such as river-banks) 3.Self-built housing 4.Overcrowding 5.Lack of public utilities and social services 6.Low income households. Shuto orizari is a shanty town? Sub questions inked to above definitions A Residents have built their houses themselves from available materials such as wood, corrugated iron? B The land is neither owned nor rented, it is iccupied 'illegally'? ...read more.

median monthly incomein 2011 is 500euros.Using this as a standard, whoever recives a monthly income less than 500euros can be catagorizes as low-income. Percentage of people with montly income below 500euros = (-50e) + (50-100e) + (100-200e)=34% + 35% + 22% = 91% Since 91% of residents have income below the general standard given by the State Statistical Office of Macedonia, they can be considered as the poorest urban inhabitants in Macedonia.This can be explained by the overall low educational level within the residents.From the questionarie I used 80% of the people are without education or stoped after primary school level. Ownership of the houses . Ownership: � Private 89% � Government 11% The majority of households fall under the category.This high figure is probably because most of the residents have inherited their houses generation by generation from ancestors long time ago. FAMILY SIZE Children Adults - (0-2) 26% - (0-2) 43% - (2-4) 46% - (2-4) ...read more.

2.Concentration on land of low economic value(Such as river-banks) 3.Self-built housing 4.Overcrowding 5.Lack of public utilities and social services 6.Low income households. Referring to the above, my hypothessis that Suto orizari is a shanty town is based on six assumptions. To concludesince only two of six caracteristics are met, the hypothesis that Shuto orizari is a shanty town is not completely justified.Even through there are certain similarities in some of the caracteristics between Shuto orizari and a shanty town.Shuto orizari is not a shanty town as commonly percived by the general public. F Evaluation First, since most of the interviewees the households in Shuto orizarihave inherited their houses by generation from ancestors long time ago, they don't know or rememberclearly are self-built. I can inrease the amount of quesionnaries given out so the affect of errors will be minimizesd.The anomalies will have a smaller effect on the ovarall results with more sets of data.Last, there are not only 6 caracteristics of shanty town.I have not chosen all the definition and caracteristics of shanty towns.As a result, the the resulting conclusion does not cover all aspects. ?? ?? ?? ?? 7 ...read more.