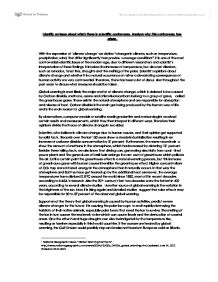 Global Warming Controversy. Scientists opinions about climate change and whether it is a natural occurrence or rather a devastating consequence of human activity are very controversial. Therefore, there has been a lot of discussion throughout the past

Identify an issue about which there is scientific controversy. Analyze why this controversy has arisen.

With the expression of ‘climate change’ we define “changes in climate, such as temperature, precipitation, wind, that differ significantly from previous average conditions”. It is one of the most controversial scientific issues of the modern age, due to different researchers and scientist’s interpretation of these findings. It involves the increase of temperature, but also vast disasters, such as tornados, forest fires, droughts and the melting of the poles. Scientist’s opinions about climate change and whether it is a natural occurrence or rather a devastating consequence of human activity are very controversial. Therefore, there has been a lot of discussion throughout the past years to discuss what measures should be taken.

Global warming is most likely the major matter of climate change, which is claimed to be caused by Carbon dioxide, methane, ozone and chlorofluorocarbons belong to a group of gases, called the greenhouse gases. These exist in the natural atmosphere and are responsible for absorption and release of heat. Carbon dioxide is the main gas being produced by the human way of life and is the main reason for global warming.

By observations, computer models or satellite readings scientists and meteorologists received certain results and measurements, which they then interpret in different ways. Therefore their opinions divide the theory of climate change in two sides:

Scientists, who believe in climate change due to human causes, and their opinion get supported by solid facts.  Records over the last 150 years show a steady industrialization resulting in an increase of carbone dioxide concentration by 31 percent. Furthermore, the same records also show the amount of methane in the atmosphere, which has increased by alarming 151 percent. Besides these telling facts, we also know that driving cars, generating electricity from coal-fired power plants and the general use of fossil fuels enlarge the amount of greenhouse which pollutes the air. Until a certain point the greenhouse effect is a natural warming process, but this increase of greenhouse gases with human causes intensifies the greenhouse effect. Higher concentrations of CO2 trap more infrared energy in the atmosphere than it naturally occurs. In that way the atmosphere and Earth surface get heated up by the additional heat. Moreover, the average temperatures have climbed 0.8 °C around the world since 1880, most of it in recent decades, according to NASA’s research. Also the 20th century’s last two decades were the hottest in 400 years, according to several climate studies. [1]Another source of global warming is the variation in the brightness of the sun. Now it is rising again and detailed studies suggest that solar effects may be responsible for 30 to 57 percent of the observed global warming.

Supporters of the theory that global warming is caused by human activities, predict severe climate changes for the future: it is causing the polar ice caps to melt rapidly destroying the habitats of their native animals, especially polar bears that need the ice to survive. The melting of the ice in turn causes the sea levels to rise which can cause floods and the destruction of coastal areas. One the other hand huge droughts can also be instigated by the temperature rise, resulting as famines especially in third world countries. If the oceans are heated by global warming, the Gulf Stream could possibly stop and make northwestern Europe as cold as Siberia. The attempt to fix these consequences would cost enormous amount of money, therefore climate change would also mean big effects on economical issues as well.

The other side to the controversial issue of global warming is the belief in climate change as a natural occurrence. There are however many ecamples of climate change occurring long before large amounts of CO2 were being produced by humans and before the debate about climate change and its justification came up.

Skeptics support their opinion with the fact that the greenhouse effect is a natural warming process. Unlike the supporters, they see greenhouse gases as a natural occurrence that are useful for keeping our planet sufficiently warm to support life, which is a proven statement. The strongest argument to carry the skeptical point of view on climate change is the fact that by looking on a much longer timescale of 100,000 years, smaller cycles of alternatively cold and warm periods, varying between 10,000 and 40,000 years, can be identified. Different reports also show that glaciers have always grown and receded.  For skeptics these longtime records lead to the conclusion that “two record centuries” are not enough evidence for global warming and are a deficient basis. Skeptics are trying to confute that carbone dioxide is the main reason for global warming, because they claim there is not enough evidence that proofs the connection between the increase of CO2 and global warming. Furthermore, skeptics argue that all the predictions which are based on climate models are not reliable.

The unreliability of climate models and the lack of data are the main reasons why the issue of climate change is this controversial. While skeptics say that despite decades of development computer models are unable to model all the processes involved; for example the distribution of water vapor or the influence of clouds. Since models will never be perfect and they will never be able to forecast the future exactly, supporters of climate change reply that computer models are the only way of trying to predict consequences and take measures beforehand. The fact of temperature rise and the increase of greenhouse gases are proven and all scientists are in complete agreement about this. So the disagreement rather lies in the difficulty of timing and amplitude of the expected changes and what kind of measures should be taken. At this point it comes to Cost-Benefit-Analysis; this is done to determine how well, or how poorly, a planned action will turn out. It relies on the addition of positive factors and the subtraction of the negative ones to determine a net result. In the case of global warming this means comparing the financial costs of four different possibilities: the first possibility is taking measures with enormous financial costs but in the end climate change won’t occur as we predicted it. This would lead to a huge loss of money and would have devastating consequences on our economy. The second possibility is that no measures are taken, therefore no money is used to help stopping climate change, but then climate change will actually occur and therefore the consequences could affect our all sense of humanity. The third way of looking at the cost-benefit-connection is taking actions against climate change, which – if climate change happens - means to be on the safe side and not take a risk. The last possibility stands for the risk taking version: we won’t take any measures, therefore no money is being spent on it and if climate change does not take place, humankind never had unnecessary expenses.

In conclusion, there is no straight answer to the question if climate change occurs due to human activities or if it is only because of natural cycles. Right now it is becoming clearer that the principal danger is not the effects of gradual changes in the climate but the possibility of rapid and irreversible changes. We tend to think of the earth and its climate as a reliable and generally stable system where the weather remains more or less the same when averaged over long periods. On the other hand there is now increasing evidence that this may not be true, that there is a distinct possibility of large, unexpected, and irreversible changes that quite rapidly have catastrophic consequences, but appears in natural cycles.  If a trend over a few decades is established, how do we know whether it is soon to be reversed by major change acting on a longer timescale?