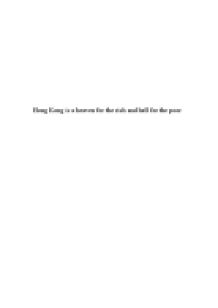 Hong Kong is a heaven for the rich and hell for the poor . Discuss.

﻿Hong Kong is a heaven for the rich and hell for the poor Introduction Hong Kong, one of the richest cities in the world and famously named the shopping paradise. However, behind the lights, there are a lot of people who sleep with their stomachs empty at night and never get enough food to eat every day. Even though Hong Kong has a lot of millionaires, its poverty rate rises every year, meaning that the poverty gap between the rich and poor grows. Not surprisingly, Hong Kong has the highest Gini Coefficient in the world, which is 0.533. Gini Coefficient is commonly used to indicate income inequality in a society; it is a number, which has a value between 0 and 1, as the value rises, the higher the degree of income inequality of the society. Rich people living in Hong Kong usually get better treatment, more resources and even more opportunities. On the other hand, poor people are often discriminated against and this has a negative impact on their accessibility and treatment received in the labor market. I agree with the statement that Hong Kong is ?a heaven for rich and hell for the poor?. In this essay, I will discuss what made Hong Kong ?a heaven for the rich and hell for the poor?, which includes economic restructuring, unequal distribution of resources and the vicious cycle of poor people. Also, I will investigate the reasons that Hong Kong is named ?A heaven for rich and hell for poor?; finally, I will discuss what can be done to tackle the poverty gap in Hong Kong. ...read more.

Thirdly, as the poor people are often unskilled and less educated, meaning that they have less job options and usually get labor work offers. This also means that they have little bargaining power and therefore have lower wages and long working hours. The low income meant a lot of financial pressure on the workers? families. As they have a very tight budget, they will not be able to afford private schools or tutorial classes after school; they can only struggle to pay for their children to attend government schools. However, the quality of public education is not as good and this will have a negative effect on the opportunities that the children receive when grown. Therefore, they may not be able to break the poverty cycle and succeed. Also, the lack of resources for their development drags down their self-esteem. As a result, the children will be less motivated to succeed and this affects greatly their chances of breaking from the poverty cycle. Unequal distribution of resources A small amount of businessmen, officials and property developers control a majority of Hong Kong?s wealth. Therefore, the poor people who are on the bottom rungs of the economic ladder receive little shares from the society?s wealth. This can be shown when the rich people live in houses of 2000 square feet, the poor struggle to pay the rent of cage houses and sub-divided units. Also, according to the survey "Impact of Hostile Working Conditions on the Mental and Physical Health of Low Income People" conducted by The Caritas Hong Kong Community Development Service, a majority of the poor people in Hong Kong suffer from a very low life standard, e.g. ...read more.

It is funded usually by mandatory payroll contributions (typically 5 to 8 percent of a paycheck) from both the employees and the employers, and from the government's tax revenue. The problems in the current social security system is that, since the amount of Mandatory Provident Fund is based on one?s income, after retirement, the funds are very likely to be insufficient, especially for the poor people, as their income is comparatively low. In order to fix this problem, I suggest that the government should set up a comprehensive mechanism against poverty, investigate the root problems of the Mandatory Provident Fund and tackle the poverty gap in Hong Kong. Changing the current job security system is unable to safeguard the people from poverty due to the small amount of money and the current system only pushes the poor people deeper into poverty as they are unable to work after retirement and have to rely on the CSSA. Conclusion To conclude, I strongly believe that Hong Kong is a heaven for the rich and hell for the poor because of 1) restructuring of Hong Kong?s economy, 2) unequal distribution of resources in Hong Kong?s society, 3) vicious cycle of the poor people. The poverty gap is widening very quickly and this will lead to a lot of consequences. In order to tackle the poverty gap, the government should provide equal education for all and also change the current job security system. The problem of poverty in Hong Kong is very urgent and severe so action must be taken immediately to avoid the poverty gap affecting the quality of future pillars of Hong Kong. ...read more.