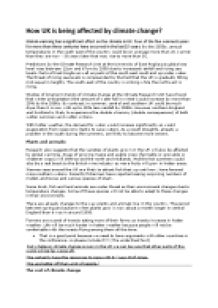 How UK is being affected by climate change

﻿How UK is being affected by climate change? Global warming has a significant effect on the climate in UK. Four of the five warmest years for more than three centuries have occurred in the last 10 years. By the 2050s, annual temperatures in the south east of the country could be on average more than 2C warmer than they are now - 30 years later that may rise to more than 3C. Predictions by the Climate Research Unit at the University of East Anglia put global sea level rises between 12cm and 67cm by 2050.due to increased rainfall and rising sea levels. Parts of East Anglia as well as parts of the south east could end up under water. The threat of rising sea levels is compounded by the fact that the UK is gradually tilting (not equal in height). The south east of the country is sinking while the northwest is rising. Studies of long term trends of climate change at the Climate Research Unit have found that winter precipitation (the amount of water fall in winter) ...read more.

1. That is a good point because we need to have arguments with other countries in the conference, so please include it!!! ( the underlined text) But whatever climate change occurs in the UK we can be sure that other parts of the world will be far worse off. "We certainly have the resources to cope with it," says Prof Jones. "We are better off than a lot of people." ________________ The cost of climate change The Association of British Insurers estimates that UK households will pay up to four per cent extra each year due to extreme weather events. Diseases: A report released by the British government warned the country?s National Health System to expect thousands more deaths and complications from heatwaves, malaria, and contaminated water( polluted water) as global warming effects progress in the next five years. How is UK tackling the climate change? Making deep cuts in our own carbon dioxide emissions of at least 40% by 2020 and more than 80% by 2050, without resorting to offsets, and in addition supporting developing countries towards low-carbon development and a green economy. ...read more.

Since the aviation industry is using lots of resources to make airports, airplanes... etc. 4. Road transport: the UK government made the taxes much higher for the vehicles that produce much gas emissions and took a promise form the cars manufactories to improve their products to more environment-friendly products. 5. The UK government is working on shorten the use of coal and provide the alternatives by doing investigations and campaigns to aware the inhabitants of the coal danger on the environment. What UK wants to achieve from this conference? The UK government wants South Africa to reduce its gas emissions because they affect us in an indirect way since they have a high level of gas emissions. We want USA to manufacture more friendly-environment cars! Otherwise we will cut off all means of importing cars form USA. We want Australia to maintain the good work and to not get obsessed by the industrial world and forget the environmental issues just like what we did so we hope you can learn from our mistakes. We want the USA to start working toward tackling the climate change as they have big authorities and ?we need actions not verbal speeches?!!! STOP TALKING! ...read more.