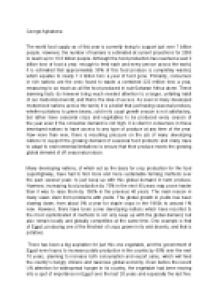 Impacts of off seasonal farming

﻿George Agbakoba The world food supply as of this year is currently trying to support just over 7 billion people. However, the number of humans is estimated at current projections for 2050 to reach up to 10.5 billion people. Although the food production has reached a vast 3 billion tons of food a year, enough to feed each and every person across the world, it is estimated that approximately 30% of this food produce is completely wasted, which equates to nearly 1.3 billion tons a year of food gone. Primarily, consumers in rich nations are the ones found to waste a combined 222 million tons a year, measuring to as much as all the food produced in sub-Saharan Africa alone. These damning facts do however bring much needed attention to a larger, unfailing habit of our modernized world, and that is the idea of excess. As seen in many developed modernized nations across the world, it is a belief that just having seasonal produce, whether potatoes to green beans, sold in its usual growth season is not satisfactory, but rather have seasonal crops and vegetables to be produced every season of the year even if the consumer demand is not high. ...read more.

Despite such little precipitation and decreasing water levels in the Nile River, Egypt have been able to take advantage of one of their most important natural resources to adapt to such restrictions. They have sunk boreholes 350 meters down into subterranean aquifers, known as the Nubian Sandstone Aquifers, and they are pumping this water through an overhead irrigation system. The desert sands which span across Egypt carry no nutrients in its dry sands to grow potatoes, so fertilizers must be mixed with the water and rained on the potatoes about 18 hours a day in order that they may infiltrate through the ground and be absorbed by the growing tubers. Egypt in fact has been fortunate to take advantage of one of the largest aquifers in the world located in Western Africa. The Nubian Sandstone Aquifer as seen above, where Egyptian farmers extract the water particularly for growing the potatoes, is the largest fossil water aquifer system in the world. The aquifer contains more than 5 million cubic feet of groundwater, a vital water source for the region, especially for the agriculture sector and for large development projects in Libya and Egypt. ...read more.

There is no mention of how much the Egyptian farmers have to pay to this day for the water that is extracted from the aquifers in the Egyptian desert in the farming of potatoes. And since the potatoes are non-perishable and can be stored for an extended period of time, it makes no sense to grow potatoes in such a harsh environment that increasingly puts pressure on the water table. To further put the aquifer in further jeopardy, the NSAS underlies four of the most water challenged countries in the world. Among these four countries are some of the lowest precipitation levels and highest average temperatures across Africa. The International Water Management Institute estimated in 2010 that by 2025, Egypt and Libya will suffer from physical water scarcity where the water used will exceed 60% of its usable supplies, and Chad and Sudan will have severe economic water scarcity. These are some of the dangers that Egypt must come to terms with; whether it is worth the economic gain to use its current 80% of water for its agricultural sector or use the water to ensure that all its citizens are provided with adequate water. ...read more.