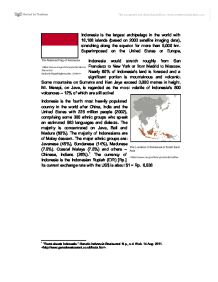 Indonesia - population trends analysis. We see that rural population of Indonesia declined by about 9 million and the urban population increased by 31 million.

Indonesia is the largest archipelago in the world with 18,108 islands (based on 2003 satellite imaging data), stretching along the equator for more than 5,000 km. Superimposed on the United States or Europe, Indonesia would stretch roughly from San Francisco to New York or from Madrid to Moscow. Nearly 60% of Indonesia's land is forested and a significant portion is mountainous and volcanic. Some mountains on Sumatra and Irian Jaya exceed 3,000 metres in height. Mt. Merapi, on Java, is regarded as the most volatile of Indonesia's 500 volcanoes - 12% of which are still active! Indonesia is the fourth most heavily populated country in the world after China, India and the United States with 228 million people (2002), comprising some 300 ethnic groups who speak an estimated 583 languages and dialects. The majority is concentrated on Java, Bali and Madura (60%). ...read more.

The major reason for this is because in urban living, less of labour is required as compared to rural life. Again in 2005, the sudden decrease in the growth rate is followed by the sudden drop in population in 2006. This can be explained by the mini-crisis that struck Indonesia in late 2005 when the prices of international oil and imports increased.2 The age dependency ratio of Indonesia kept decreasing. This is due to the rural to urban population migration. In urban cities, there are 2 children per family thus decreasing the dependent people per person. Also in urban cities, there are many investors from other countries who set up businesses, thus creating more job opportunities and reducing the Dependency ratio. The infant mortality rate has been steadily declining over the past 10 years. This indicates a major development in the medical sector of the country. ...read more.

In rural areas, mostly primary activities such as farming, fishing, etc. are done. Whereas in urban population secondary and tertiary activities have a greater share which generate more money. An increased life expectancy at birth keeps alive higher experienced people which can help a great deal in times of crisis, become teachers and share their knowledge. All these lead to an increasing GDP of the country. The unemployment rate is declining and is a healthy indicator of economy. More jobs are available as a result of the growing economy and helping growth. With better family planning measures, education and foreign investment in the industries the unemployment rate is the lowest in the past decade. The UPL (Under poverty line) population is the lowest in the last decade. This indicates better affluence resulting from the higher urban population. As measures of production, education and employment opportunities are improving, the per capita income growth is directly impacting the UPL population and hence augurs well for an sustained GDP growth in the future. ...read more.