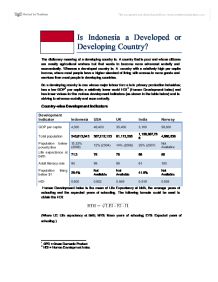 Is Indonesia a Developed or Developing Country?

Is Indonesia a Developed or Developing Country? The dictionary meaning of a developing country is: A country that is poor and whose citizens are mostly agricultural workers but that wants to become more advanced socially and economically. Whereas a developed country is: A country with a relatively high per capita income, where most people have a higher standard of living with access to more goods and services than most people in developing countries. So a developing country is one whose major labour force is in primary production industries; has a low GDP1 per capita; a relatively lower world HDI2 (Human Development Index) and has lower values for the various development indicators (as shown in the table below) ...read more.

The following formula could be used to obtain the HDI: (Where LE: Life expectancy at birth; MYS: Mean years of schooling; EYS: Expected years of schooling ) Looking at the table, we see that Indonesia has low HDI as compared to other developed countries (USA, UK, Norway) with an approximate difference of 0.3. This automatically makes Indonesia fall under the 'developing country' label. Other major factors such as life expectancy at birth, adult literacy rate and GDP per capita are comparatively very low as compared to the developed countries. From the table above, we also see that India is another example of a 'developing country'. The following table shows the labour distribution in percentage in some countries: Country-wise Labour Distribution Field Indonesia USA UK India Norway Agriculture (%) ...read more.

with some labour for secondary industries too. Indonesia compares well with India with the reason being that Indonesia too has quite a lot of population working in the primary industry with a large number in the service sector too. This indicates that Indonesia is moving towards being a fully developed country with focusing its labour force towards more advanced industries, by improving its HDI (from 0.390 in 1980 to 0.600 today); by increasing its life expectancy (from 70.9 in 2009 to 71.3 years today); increasing its GDP per capita ($4,000 in 2009 to $4,300 today). Indonesia can be called a sub - developed or a developing country as per its condition in the past and today. It efforts to have its development indicator values be comparable to those of already developed nations (USA, UK, Norway) is what makes it a 'developing' country. ...read more.