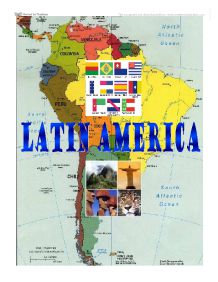 Latin America Spanish and Portuguese colonists and officers, settling in central and south America during the 16th century, are soon followed by the French and English staking a claim to North America. A clear pattern becomes well-known. The two Atlantic seaboard countries of southern Europe concentrate on the southern part of the new continent, while their three European neighbours to the north struggle between themselves to rule north America. The parts of the continent become divided into two distinct parts, which is Latin America and North America. The term Latin America was first used in the 19th century. The region consists with an exception of those parts of the American continent occupied by the Spanish. But the exception is too large to overlook and Brazil belongs to Portugal. Spanish America can not be said. Latin America comes into use at a time when almost all regions south of USA spoke Spanish or Portuguese, which are Latin-based romance languages and are Roman Catholics where in the north of the continent is largely Anglo-Saxon and Protestant ruled. This region was home to many native people and it had superior civilizations, which included the Aztecs and the Inca, before the arrival of Europeans. The Europeans came in the late 15th century. When they came, most of Latin America was owned by Spain and Portugal and some parts were owned by France. In the early 19th century most of the countries in the region achieved their independence, although a few small colonies remain. Spaniards in a New World The half century after Columbus's voyage sees a lot of activity in the new world as the Spanish struggle to make the most of their sudden new opportunities. By 1506 the entire continental shore of the Caribbean Sea has been explored from the top to the bottom. It was known at first as Tierra Firme and it is believed to be part of the coast of Asia. But later explores found that it was not the coast of Asia. ...read more.

Finally, and most important for the US was the demonstration effect of the Cuban Revolution. The revolution proudly announced its intention of lighting fires of revolution throughout Latin America seeing that its very survival was dependent on creating or supporting revolution throughout the region. One of the sequels from the mellowing of the Cuban Revolution was the emergence of new organization that wanted to change the conservative position of Latin American politics. A second wave of guerrilla movements developed. From South America this wave moved to Central America, the Caribbean, and in particular to Guatemala, Nicaragua, and El Salvador. The Guatemalan guerrilla movement got its start following the CIA backed coup of president Arbenz who required to nationalize banana properties owned by United Fruit and to create an 8 hour day and minimum wage law. In his place the US installed a puppet rule that would be friendly to US corporate interests. Beginning in the 1960's the rebel movement grew to where by the 1970's the rebels were engaging the Guatemalan military in open armed conflict. But by the early 1980's the revolutionaries were unable to withstand the scorched-earth policy of General Efrain Montt that drove entire peasant villages into exile in Mexico. The army killed tens of thousands and the US backed regime had one of the worst human rights records in the world. The rebels did not expect the Army's offensive in 1982 and were totally unequipped in terms of weapons and missiles to deal with it. But despite the defeat the popular political military organizations built up during the 1970's survived and they continue today to be a fundamental political actor in Guatemalan politics. In El Salvador, rebel movements sprung up after the failed 1932 peasant insurrection when the military killed up to 40,000 people in two weeks. By the late 1940's Salvador Carpio had formed the FPL in order to take the oligarchy of El Salvador. ...read more.

Literally translated as healer from Spanish, curandera often use herbs and other natural remedies to cure illnesses, but their main method of healing is magic. This is because they believe that the causes of many illnesses are lost nasty spirits, a lesson from God, or a curse. Curandera treat ailments like espanto, Spanish for shock, empacho, Spanish for surfeit, susto, Spanish for fright, mal aire, literally bad air, and mal de ojo, Spanish for evil eye. They also treat ailments with religious rituals, ceremonial cleansing, and prayers. While curandera are capable of treating these ailments, in reality they rarely do for many ailments, such as empacho, can be treated by family members. Often Curandera employ the use of sung Icaros to contact certain spirits to aid them in their healing work. The remedies of the curandera are often helpful, but sometimes have negative effects on the health of their patients. For example, a common method of healing mollera ca�da, a condition in which an infant's fontanelle has sunken, is to hold the infant's feet with its head down and perform a ceremonial ritual. Other remedies are harmless for example a common method of treating mal de ojo is to rub an egg over the body of the sick to draw out the evil spirit causing the disease. Remedies also vary between regions, in Andean countries the guinea pig is often used as a ceremonial method. These methods of treating health problems often lead to conflict with modern medicine, because doctors reject the curandera's healing as superstitious and worthless. As a result, curandera have often experienced unfairness and been likened to witches, by the medical profession. However, because of the importance of the mystical in traditional Mexican culture, these insults generally lead only to disagreement and rejection of modern medicine by traditionally minded Mexicans. Other medical doctors, recognizing the benefits of the spiritual and emotional healing offered by curandera, have begun to work in conjunction with them, supporting their use of rituals and ceremonies in the healing of the sick while insisting that patients receive modern medical attention as well. ?? ?? ?? ?? ...read more.