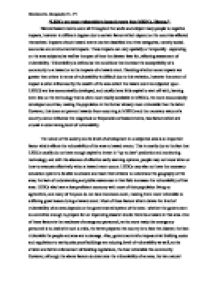 LEDCs are more vulnerable to hazard events than MEDCs. Discuss.

"LEDCs are more vulnerable to hazard events than MEDCs. Discuss." Natural hazard events occur all throughout the world and subject many people to negative impacts, however in different degrees due to certain factors which depend on the countries affected themselves. Impacts of such hazard events can be classified into three categories, namely social, economic and environmental impacts. These impacts can vary spatially or temporally - depending on the area subjected as well as the span of time the disaster lasts for, affecting assessment of vulnerability. Vulnerability is defined as the conditions that increase the susceptibility of a community to a hazard or to the impacts of a hazard event. Deciding whether some impacts are greater than others in terms of vulnerability is difficult due to this variation, however the extent of impact is often influenced by the wealth of the area which the hazard event is subjected upon - LEDCS are less economically developed, and usually have little capital to start off with, leaving even less on the technology ...read more.

One of these factors is the readiness of emergency personnel, as the more ready the emergency personnel is to deal with such a crisis, the better prepared the country is to face the disaster, the less vulnerable the people and area are to damage. Also, governments who impose strict building codes and regulations to earthquake proof buildings are reducing level of vulnerability as well, as the stricter and better enforcement of building regulations, the less vulnerable the community. However, although the above factors do determine the vulnerability of an area, the two natural factors, namely magnitude or frequency of the event are essentially unavoidable, affecting both LEDCs and MEDCs. These factors are further exemplified in the case studies of the Haiti Earthquake which occurred in January of 2010, as well as the Fukushima earthquake, which occurred in April 2011. To remove the two natural factors from this discussion, the magnitudes of both earthquakes measure 7.0 on the Richter scale, and the focus of both earthquakes was 13km from the epicentre. ...read more.

Haiti was also at a disadvantage in terms of vulnerability due to other factors - Haiti had no ready emergency and rescue team to aid in the rescue of trapped victims, compared to Fukushima, which had frequent evacuation drills and had a extremely ready emergency and rescue team. The communication system Fukushima used was extremely fast as well in notifying the relevant authorities as well as to warn the citizens, however Haiti did not have such a privilege and did not have technology readily available for them to use. This case study helps us realize that by having a higher economic status; being willing and able to afford as well as provide higher technology to prepare the area well for such a hazard event helps in many ways to reduce vulnerability of each area to such hazard events. Evidently, MEDCs, due to their higher economic status, have more of such privileges and therefore are less vulnerable to such hazard events, however it does not mean that the MEDCs do not suffer damage as well. Charlene Su, Geography HL, P1 Charlene Su, Geography HL, P1 ...read more.

This essay does review the vulnerability of LEDCs in comparison to MEDCs. It gives a good generic overview which is then explored in more depth through two relevant case studies. This answer would benefit from greater use of paragraphs.
4 stars