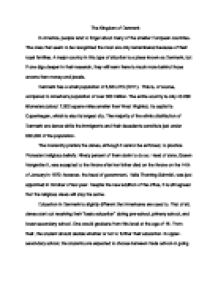 The Kingdom of Denmark In America, people tend to forget about many of the smaller European countries. The ones that seem to be recognized the most are only remembered because of their royal families. A major country in this type of situation is a place known as Denmark, but if one digs deeper in their research, they will learn there is much more behind those crowns than money and jewels. Denmark has a small population of 5,564,219 (2011). This is, of course, compared to America's population of over 300 million. The entire country is only 43.098 kilometers (about 7,000 square miles smaller than West Virginia). Its capital is Copenhagen, which is also its largest city. The majority of the ethnic distribution of Denmark are danes while the immigrants and their decedents constitute just under 600,000 of the population. The monarchy prefers the danes, although it cannot be enforced, to practice Protestant religious beliefs. Ninety percent of them claim to do so. Head of state, Queen Margrethe II, was accepted to the throne after her father died on the throne on the 14th of January in 1972; however, the head of government, Helle Thorning-Schmidt, was just appointed in October of last year. ...read more.

The managers themselves make sure that all workplaces do not work over 37 hours. For example, if one stays for overtime at work, then they will be presented with time off on the next day to make up that time with their family. The Danish do not appreciate it when anyone messes with their food. When at a buffet, they will quickly correct you if you do not make your toppings right on your bread. Just as everything else in Danish society, food is a traditional art form in which every meal is eaten at home, except for lunch. For breakfast, they eat rye or white bread with jam or cheese with coffee to drink while lunch is almost always at a restaurant. Lunch consists of cold items, usually buttered, rye bread topped with sliced sausage, boiled eggs, or liver paste. (This does not sound particularly appetizing to me.) Dinner, or "middag" (meaning "middle of the day" because of when it used to be eaten), is a family meal. In the mid 20th century it consisted of two courses daily. The first being fruit soup or meat broth, and the second being a fish or mean entree always with a side of potatoes and gravy. ...read more.

Copenhagen's Tivoli amusement park is one of biggest and popular in Europe. Actually, it is one of the oldest amusement parks in the world. Once Walt Disney visited Tivoli, and he was so exited with it that later he decided to make something similar. As the result he built famous Disneyland. Many famous people come from Denmark, even if you don't think of them on an every day basis. The creator of the sail-like opera house in Sydney, Australia was an architect from Denmark. The Lego was also created by a Dane. (Since 1932, more than 320 billion units of Lego bricks have been sold. Studies show that every human being in the world is the owner of about 56 lego bricks. ) Hanes Christian Andersen is a famous fairy tale writer from Denmark. His books have been translated into more languages than any other, except the Bible. Just recently, in 1989, Denmark became the first European country to legalize same-sex marriage. It now offers the same rights to homosexuals as heterosexuals. Denmark is a very small country, but all the same, it has transformed the world that we live in today. What would life be without the Australian opera house and your childhood without legos? But needless to say, I love America, and I don't plan on going anywhere else. ...read more.