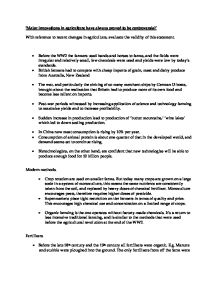 'Major innovations in agriculture have always proved to be controversial(TM) With reference to recent changes in agriculture, evaluate the validity of this statement.

'Major innovations in agriculture have always proved to be controversial' With reference to recent changes in agriculture, evaluate the validity of this statement. * Before the WW2 the farmers used hands and horses to farms, and the fields were irregular and relatively small, few chemicals were used and yields were low by today's standards. * British farmers had to compete with cheap imports of grain, meat and dairy produce from Australia, New Zealand * The war, and particularly the sinking of so many merchant ships by German U-boats, brought about the realization that Britain had to produce more of its own food and become less reliant on imports. * Post-war periods witnessed by increasing application of science and technology farming to maximize yields and to increase profitability. * Sudden increase in production lead to production of 'butter mountains,' 'wine lakes' which led to down scaling production. * In China now meat consumption is rising by 10% per year. * Consumption of animal protein is about one-quarter of that in the developed world, and demand seems set to continue rising. * Biotechnologists, on the other hand, are confident that new technologies will be able to produce enough food for 10 billion people. ...read more.

The war, and particularly the sinking of many merchant ships by German U-boats, brought about the realization that British had to produce more of its own food and become less reliant on imports. Post war periods witnessed by increasing application of science and technology farming to maximize yields and to increase profitability. Increased use of fertilizers, pesticides, machinery, and altering the genes within the produce led to a sudden increase in production and profitability of farms, but as a consequence it also led to disputes over the environmental and human effects these innovations had. But with an increasing population, with the world population standing at 6 billion, and is forecasted to reach 10 billion by 2150, these innovations were necessary. With Chinas meat consumption rising by 10% each year, production of meat has to increase to meet the demands for the future. There are three types of farming, crop rotation, monoculture, and organic farming. Crop rotations are used on smaller farms, which allows farmers to switch crops on their farms in order to alter the nutrients taken out and put into the soil by the crops. This is a very natural for farming and has little effect on the environment. After the World War 2 farming has grown on a larger scale, and therefore smaller farms joined and became bigger farms which utilized monoculture. ...read more.

This was going on since the 1970's where mixing food with animal DNA resulted in the plant gaining the benefits of the animal. But there is also a strong opposition to GM foods, which resulted in fields full of GM crops being destroyed in 1999 in England. The opposition comes from vegans and religious groups, where vegans oppose the use of animal DNA, whilst the religious groups oppose the changing of nature, where they believe that changing the nature is against god's will. But doctors and scientists are worried about the effect on health of consuming the GM foods, where there could be a possible link with cancer. There is also concern over how the GM foods can become resistant to some antibiotics. Crops can also be altered to become herbicide resistant, therefore farmers could reduce the need for chemicals that contribute to environmental damage. Ultimately all the innovations in technology have their negative effects upon the environment, but they are developed in order to cater for the increasing demand for foods. With accelerating growth in world population scientists developed ways to increase yields, time taken for crops to mature, decrease the pests etc. With the technology developed scientists are now developing them to become more environmentally friendly. For example the pesticides, where when they were developed they were dangerous to the environment and the food chains, but now they have become biodegradable and less dangerous. ...read more.