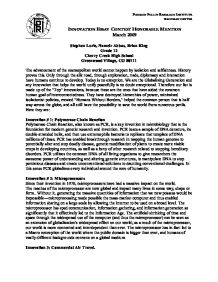 Major inventions that have led to global interconnectedness.

Stephen Lurie, Nameir Abbas, Brian King Grade 12 Cherry Creek High School Greenwood Village, CO 80111 The advancement of the cosmopolitan world cannot happen by isolation and selfishness. History proves this. Only through the silk road, through exploration, trade, diplomacy and interaction have humans continue to develop. Today is no exception. We are the Globalizing Generation and any innovation that helps the world unify peacefully is no doubt exceptional. Therefore our list is made up of the "Top" innovations, because these are the ones that have aided the common human goal of interconnectedness. They have destroyed hierarchies of power, minimized isolationist policies, created "Humans Without Borders," helped the common person that is half way across the globe, and all still have the possibility to save the world from numerous perils. Here they are: Innovation # 1: Polymerase Chain Reaction Polymerase Chain Reaction, also known as PCR, is a key invention in microbiology that is the foundation for modern genetic research and invention. PCR heats a sample of DNA denature, its double-stranded helix, and then use extremophile bacteria to replicate that template of DNA millions of times. ...read more.

can be seen as an extension of globalization's widespread effect on our world; as a result of the microprocessor, our world is more connected and interdependent than ever. The microprocessor has in-fact led to a Macro conception of the world where the public domain is bigger than ever, and humans of vastly different backgrounds convene on a global medium. Innovation 3: Commercial Air Travel. The most physical and obvious of the globalizing agents has been the advancement of Commercial Air Travel since 1969. The power of flight literally transcends any other mode of transportation and links anywhere to anywhere else. Flight, although currently in danger, has increased a 6 billion person diplomatic program, as every passenger on an international flight becomes an ambassador for their home nation. It has increased ties to family, friends, strangers, and any new experience your wallet can afford. Besides personal travel, commercial planes hold various other capacities integral to saving lives such as food transport. Commercial air travel is the safest transport per passenger mile of any mode of transportation and far and away breaks and distance limit that personal transport proposes. ...read more.

The Marshall Plan's innovation in diplomatic efforts set the precedent for rescue organizations, like the IMF and World Bank, to give rescue packages and loans to nations on the brink. Innovation # 5: Direct Relay Communications Satellite. While Sputnik had already been launched by the soviets as an acceleration of foreign hostility, the satellite innovation that broke down borders was the first Direct Relay Communications Satellite, Telstar, launched by AT&T. This innovation which breached the troposphere was a globalizing agent, and a potentially "galaxizing" one. On our third rock from the sun the Communication satellite has allowed many of today's other foremost inventions to become even better. Television, Telephone, radio, and GPS, have all been created or had a second coming due to satellite expansion as Satellites can now beam data for communication nearly instantly to any location on the globe. Aside from the increased connection between every earthling, these direct relay satellites have even reduced the light years of the expanding galaxy. Space based solar power and space exploration from imaging and probes all rely on this technology. ?? ?? ?? ?? 2 FOREIGN POLICY RESEARCH INSTITUTE WACHMAN CENTER INNOVATION ESSAY CONTEST HONORABLE MENTION March 2009 ...read more.