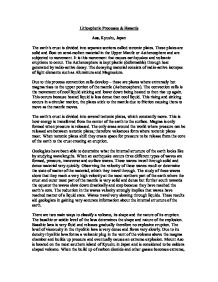 Lithospheric Processes & Hazards Aso, Kyushu, Japan The earth's crust is divided into separate sections called tectonic plates. These plates are solid and float on semi-molten material in the Upper Mantle or Asthenosphere and are subjected to movement. It is this movement that causes earthquakes and volcanic eruptions to occur. The Asthenosphere is kept plastic (deformable) through heat generated by radio-active decay. The decaying material consists of radio-active isotopes of light elements such as Aluminum and Magnesium. Due to this process convention cells develop - these are places where extremely hot magma rises to the upper portion of the mantle (Asthenosphere). The convection cells is the movement of cool liquid sinking and lower down being heated to then rise up again. This occurs because heated liquid is less dense than cool liquid. This rising and sinking occurs in a circular motion, the plates stick to the mantle due to friction causing them to move as the mantle moves. The earth's crust is divided into several tectonic plates, which constantly move. This is how energy is transferred from the center of the earth to the surface. Magma is only formed when pressure is released. The only areas around the world where pressure can be released are between tectonic plates; therefore volcanoes form where tectonic plates meet. When tectonic plates shift they create space for pressure to be release from the core of the earth to the crust creating an eruption. ...read more.

The color of the water is very torques due to the minerals and heat from the volcano. Mount Aso's nature of eruption is classified as a Krakatoan. This shows that the eruption is exceptionally violent and may remove much of the original cone. Mount Aso has a twenty-four kilometers wide caldera, which was formed during four major explosive eruptions from three hundred thousand to ninety thousand years ago. The four eruptions produced voluminous pyroclastic flows that covered most the Japanese island, Kyushu. The highest point of the volcano is 1592 meters above sea level. The most recent eruption was on January 20th of 2004. An increase of thermal activity was experienced a few weeks prior to the eruption A volcanic eruption such a level can have drastic consequences on the surrounding environment. The immense ash cloud dispensed from the volcano covered huge areas of land depending on winds. The people that live on the island Kyushu depend on agriculture more than the other three islands of Japan. The ash created by the volcano does not contain any supportive minerals for agriculture. When the ash fell down from the sky and covered compete areas of land and destroyed most of the farming industry in. The different impurities in the ash drained into the soil and later killed almost all growing plants or farming. ...read more.

In response to the eruption of Mount Aso the local community remained focused and very determined to help one another and get everything back to normal as soon as possible. Due to the culture in Japan almost victims or bystanders fled but instead were very attentive to aid in the recovery. The communities surrounding the volcano were very close and supportive of one another. They set up emergency shelters for the victims who decided to stay until they found or uncovered their relatives and took those who wished to a camp away from the disaster area. Japan is a more economically developed country therefore its disaster response units were very efficient helpful. Not only that but Japan experiences earthquakes and volcano eruption reasonably often compared to other countries. Emergency response and Search and Rescue units were very cooperative and experienced. Japanese government has coordinated a disaster relief plan for various situations. The eruption of Mount Aso was not at such a scale it required short-term international aid from the United Nations or neighboring countries. The government took on the long-term responsibility of the regeneration of the area and grants for businesses to re-establish themselves. Other long-term aspect of the rebuilding process involves insurance companies. The Japanese government have dedicated themselves to improve their ability to detect future eruption more accurately to prevent the lose of further life. Also plans to reduced the impact volcanoes and earthquakes have on the population of Japan by building earthquake proof buildings. ...read more.